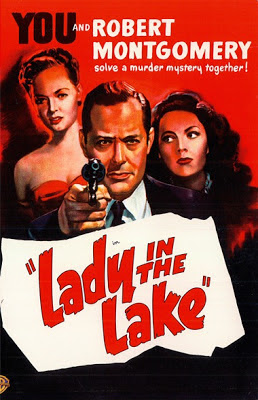 Film noirs were renowned for their path breaking facets – dark thematic explorations, disturbing sociopolitical commentaries, violence and sexual innuendoes, disconcerting tones, reversal of types, bravura expressionism, etc. Consequently, formalism, in varying degrees, was always there in them; but rarely were they as formally audacious as Lady in the Lake, Robert Montgomery’s first directorial venture. Hawks’ The Big Sleep was the most famous Marlowe film, Altman’s The Long Goodbye the most deconstructionist, and Dmytryk’s Murder, My Sweet the best of the lot; but this was a rarity in that the story was chronicled from Marlow’s point of view - in fact, it was possibly the first film where the narrative was shot from the eyes of the protagonist. Interestingly, Dark Passage, which released later the same year, too employed this technique, albeit only for the first third of its length. The story revolves around a case of extra marital relationships, and eventually double crosses and murder, which Marlow (played by Montgomery himself) gets embroiled into when he decides to write a story based on his investigations, and sends it to a publisher of pulp fiction, to earn some extra bucks. Montgomery was on-screen for only a few moments, but still managed to carve an identity for his character through his sharp dialogue delivery, while Audrey Totter played the role of an unreliable and dollar-crazy femme fatale. All the hallmarks of a Chandler novel are present here, viz. labyrinthine plot, vitriolic world view, human corruption and duplicity, tar-drenched cynicism and staccato dialogues – this was, in fact, the only time when Chandler adapted his own novel for the screen.

Shubhajit, I'm glad you recommend this and didn't drop the "interesting failure" hammer or the like here, as so many tend to do with this film.

The narrative gets a bit messy towards the end, and in that respect the first person perspective admittedly somewhat hampers the proceedings, as details and plot threads aren't able to connect as cleanly as a more classical formal strategy would allow; otherwise it is a total triumph of mood and atmosphere, and that is where Montgomery's technique really pays off - there's an enveloping quality to the entire film that I value immensely. It's absolutely one of my favorite noirs. And Audrey Totter is amazing.

Haha, yeah, lot of people apparently found this narrative style gimmicky. As if, if one chooses a path that is radically different from what the audience is accustomed to, then the film must compulsorily be gimmicky.

Yes, I agree with you in that this isn't a flawless film. But, on the whole, Montgomery's audacity worked in favour of the film. One must also appreciate the kind of challenge that he must of faced while shooting nearly the entire film from the character's POV - and but for a few instances here & there, I felt it was a success on the technical front as well.

Thanks a lot Drew for sharing your enthusiasm for this admittedly great noir.

I am admittedly not the huge fan of this film that others are (I see my friend Drew is an adherent as well) but I don't pose it deserves to be dismissed either. Yes this is the only time Chandler adapted, and there are some splendid hard-boiled lines. This is of course experimental in it's approach, and there are a few scenes that are buffo, but somehow for me it never seemed to come together.

Thanks Sam. Great to know that you appreciate the film's experimental approach (which I personally had found audacious) and the hard-boiled dialogues (Chandler never disappoints on that). That said, I do understand your stand on the film.