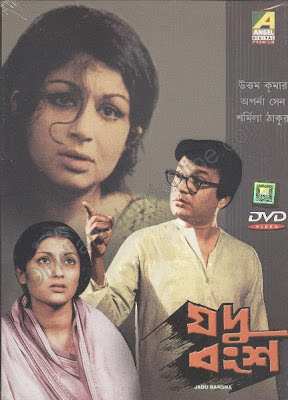 Directed by former film critic Partha Pratim Choudhury, Jadu Bansha was both a chronicle of its times and a critique of its era. The Naxal revolution in Bengal, which had a strong presence of educated youths, led to not just great political turmoil but also social fallouts in terms of severe disenchantment and disillusionment of a whole generation. Made in a distinctively modernist and experimental style, the film chronicled the angst, frustrations, crises and the oftentimes futile attempts at reconciliation of four young guys who hang out together. The director did a coup of sorts in terms of the cast. Uttam Kumar, the great star-actor, played the role of a mild natured middle-aged man who has failed as a businessman, and gave, what many consider, one of his finest performances laced with restraint, dejection and a tragic end to a tragic life. Sharmila Tagore starred in a cameo as a woman of so-called loose morals who the angriest of the four guys, played by Dhritiman Chatterjee, is in a relationship with. Aparna Sen, too, was part of the cast, and that too in a double role. Finally, Santosh Dutta added some comic flavor, in this otherwise tale of gloom and despair, as a man of means who uses hearing impairment to dodge requests for help. The director used a couple of novel narrative techniques, viz. shifting to quick flashbacks to elucidate certain conversations and plot elements, and using on-screen titles, as opposes to voiceovers, to bring forth the characters’ thought processes. Despite the poor preservation quality, the jarring flow and tad over indulgence, the film was still worth a watch for its formalism and theme.

I happened upon an upload of this film while looking for Uttam Kumar movies on youtube. The segment I saw - which was part 7 of 12 of the upload - was fascinating. Any idea who does the voiceover? It sounded a bit like Soumitro but I haven't been able to find a cast list that includes him.

Great to know you're interested in Uttam Kumar movies. Unlike Soumitra Chatterjee, Uttam Kumar (whose real name was Arindam Chatterjee, UK was his screen name) never received much international attention even though, his popularity apart (he was & continues to remain even to this day a huge icon in Bengal), he is considered by many as an even better actor than Soumitra on account of his effortless flair in front of the camera.

Anyway, as for this film, I don't quite remember who provided the voiceover - my guess would be it was Dhritiman's voice, but it was certainly not Soumitra's. And yes, this quite an interesting watch despite the poor print quality.