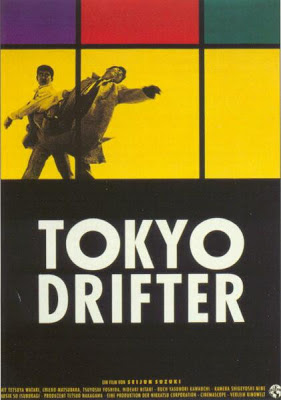 Anyone who has seen maverick Japanese New Wave filmmaker Seijun Suzuki’s Youth of the Beast might know what to expect while watching Tokyo Drifter. This colourful, riotous and gleefully over-the-top gangster potboiler, with equal doses of wacky humour and surreal touches, is essentially the kind of film that would make Tarantino leap up in joy. When powerful yakuza gangster Kurata (Ryuji Kita) goes straight, so does his trusted right-hand man Tetsu (Tetsuya Watari). But, when he realizes that he is coming in the way of peace for his Boss, who is more than a father to him, he takes leave from him and the beautiful nightclub singer he likes (Chieko Matsubara), and becomes a drifter. But the bad guys just refuse to budge, and so it ends the only way it can end – in a spectacular showdown amidst some cool gunplay. And on the way he is taught a valuable lesson by a fellow lone wolf and an equally adroit ex-yakuza henchman – that loyalty can often be a life-threatening proposition. The plot wasn’t anything new and was filled with holes the size of craters. But then, Suzuki, as one might guess, wasn’t anyway concerned with watertight storylines to start with; for him, style and form overruled content. Consequently, what he concocted was a delirious mix of idiosyncrasies, cool and unpredictability, including one of the most rambunctious drunken brawls ever recorded on screen. The film’s vibrant colour design, set-pieces and madcap editing were particularly memorable. Yet, interestingly, it had an underlying streak of melancholia as well, marvelously emphasized by the absolutely beautiful title song that formed its principal motif.

I've really been enjoying the idea of branching out and watching more Japanese films as of late. This one sounds absolutely amazing. Thanks for the fantastic recommendation.

Yeah, Japanese cinema, particularly those belonging to the New Wave, I feel are largely explored outside the country. I'd begun my tryst with Japanese New Wave with the movies of Shohei Imamura, and slowly but surely I've realized that there are a plethora of gems waiting to be discovered. Seijun Suzuki is one of such irreverent filmmakers who were part of that fascinating movement.

"The film’s vibrant colour design, set-pieces and madcap editing were particularly memorable. Yet, interestingly, it had an underlying streak of melancholia as well, marvelously emphasized by the absolutely beautiful title song that formed its principal motif."

I completely agree on all three points here Shubhajit and this is absolutely a Tarantino kind of film through and through. Suzuki is a supreme stylist and TOKYO DRIFTER is one of his trademark works. Yes, YOUTH OF THE BEAST is another. Superb review!

Thanks Sam. I've rarely seen a filmmaker having so much fun with his medium. Suzuki was among the most popular of the Japanese New Wave filmmakers, and it sure is understandable why. I hope to see his Branded to Kill sometime, which possibly ranks as his most renowned work with Tokyo Drifter.