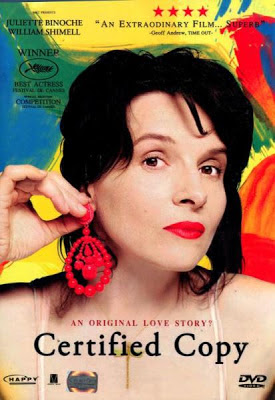 Certified Copy, made in French, English and Italian languages, and set in a quaint village in Tuscany, was the first feature outside his country by the renowned Iranian filmmaker Abbas Kiarostami. Witty, playful and delectably self-reflexive, the film was made in the veins of Linklater’s cult classics Before Sunrise and Before Sunset, where a couple spends the entire running time conversing with one another. It opens with James Miller (William Shimell), a British author, introducing his new book where he has discussed the notions of originality and copy from the point of view of art. Before long he is acquainted with an unnamed woman (Juliette Binoche), who owns an antiques shop and is an admirer of James. As they begin their day-long conversational trip around town, it slowly become difficult to say whether or not they knew each other before, until, after one memorable sequence in a café, the two start interacting as if they have been married for 15 years. Though it seems a joke initially, by the time the credits start rolling it becomes impossible to state one way or the other. Through this cheeky yet ingenious plot progression, Kiarostami marvelously blurred the line between authenticity and fakeness, and extrapolated this idiom from art to life, and vice-versa, by subtly emphasizing the artificiality of the mirror of the cinematic medium. Not to forget, the film also provided a searing examination of marriage gone stale through the years. Binoche gave a wonderfully endearing turn while Shimell managed to hold his own despite this being his first movie role, in this deliciously mounted and lusciously photographed film.

Shubhajit, I have very high regard as well for this film. Kiarostami crosses the language barrier to create a work of complexity and deeply emotional (and ultimately) universal resonance. It’s driven by nuanced performances by Juliette Binoche and William Shimell and it’s alluring Tuscany setting, but there are metaphorical and metaphysical elements at play, par for the course for Kiarostami. Again you've penned a master class review of an important contemporary work.

Thanks a lot Sam for the kind words. Yes, the film does have a universal resonance - both in its examination of marital ennui & its daringly formal deconstruction of originality vis-a-vis fake in the world of art. This sure is an important film of recent times.