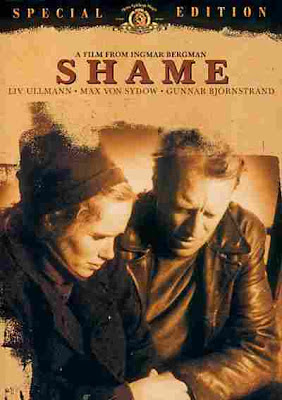 Bergman made Hour of the Wolf and Shame in the same year, and even cast two of his favourite actors, viz. Max von Sydow and Liv Ullmann, in the lead roles for both; yet the two films couldn’t be any more different from one another – be it tonally, stylistically or thematically. In fact this powerful indictment against the tragedy or futility of war was possibly the Swedish Master’s sole venture in this particular genre of cinema. Jan (Sydow) and Eva (Ullmann) are simple folks and a happily married couple. But there are certain strong differences between the two in terms of their personalities, natures and attitudes, and they become intensely stark and reach irreconcilable proportions when they suddenly find themselves in the middle of a rampaging war. Bergman didn’t take any ideological sides in terms of the opposing political forces; rather, his intent here was to strip war to its essentially primordial nature, and portray how it brings out the primitive beasts within us otherwise cloaked in the veneer of civility. Jan’s devastating transformation when survival instinct kicks in, and Eva’s realization of that, which, at a subconscious level, she was probably always aware of, made for a disconcerting, heart-wrenching and psychologically arresting watch. Both Sydow, in another stand-in for the auteur, and the ethereal Ullmann gave fabulous, deeply layered performances; Gunnar Bjornstrand, too, was good in his brief but important role as a mild-natured war criminal. Shot in elegant black-and-whites, the otherwise simplicity of its narrative style, the directness of content and the profundity of its theme made this one of his most accessible films, but a memorable one nonetheless.

"...yet the two films couldn’t be any more different from one another – be it tonally, stylistically or thematically."

I disagree. Both films have much in common. The difference is that HOUR is about the war raging within and SHAME is about war raging without.
But they are similar in the sense that Bergman is obsessed with the need to be freely neurotic.
Bergman was neurotic and indulged in his own neuroticism in life and art.

So, as jarring as the war is in SHAME is, the real problem isn't so much its violence on the peace as on the personal freedom to be neurotic.
Bergman wanted to be left alone to be neurotic and brood psychologically. He hated the idea of war not so much because it destroyed social harmony but because the loss of peace would rob him of his freedom to wage war on his own psyche.

So, HOUR is about the freedom of waging psychic war on oneself, and SHAME is about a real war coming between oneself and one's own neuroticism.
The theme of SHAME is there in PERSONA when the woman stares at a Holocaust picture and watches footage of Vietnam on the TV.
She is an artist/actress wrapped up in her own neuroticism. She's troubled but also happy indulge in her neuroticism. But this freedom to indulge in her own neuroticism fills her with guilt since it's a kind of luxury. People in war zones don't have such freedoms. They must struggle to survive physically.
One must have freedom and privilege to indulge in neuroticism. She's a rich and successful actress who decides to enter a hospital because she has come up with some neurotic reason for not talking. During a real war, there would be no room for such indulgences as hospitals would be filled with wounded and dying.

Bergman was a great filmmaker but also a selfish and self-absorbed prick. In a way, he already did SHAME with SILENCE, a movie where two neurotic women do their neurotic things while war is brewing with tanks rolling around the city.
It's essentially, "I wanna be a neurotic artist nitpicking on every little psychic louse, so I don't want any war to come in between me and my art/neuroticism."