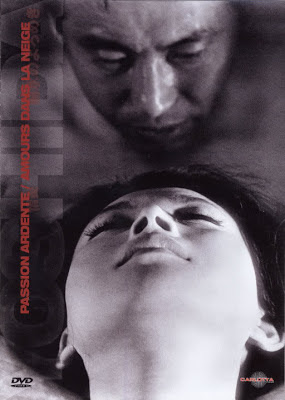 Yoshida’s Affair in the Snow was, in many ways, a complementary and companion piece to his excellent earlier film Woman of the Lake – not just tonally and stylistically, but thematically too. In both cases the protagonist, in her own ways, rebelled against her status quo; but, while in the latter she moved onto an uncharted territory, here she moved back to an older one. Yuriko (Mariko Okada), an alluring lady working in an upscale beauty salon, is in a turbulent affair with the younger Akira (Yukio Ninagawa). His extreme jealousy, mood swings, possessiveness and perversion, coupled with in deep existential dilemma, compel her to call of their affair. But, as she hops city to resolve a personal issue, she takes the help of Isao (Kazuo Imai), her soft-spoken former lover who she had left, ironically, because of his inadequacy. Unable to let her go and his jealousy further stoked, he follows her, and as the three, each delicately poised with the other, travel to a snowy town, an interesting ménage à trois ensues which made for psychologically engaging viewing. Role reversals occurred as the narrative progressed, which eventually led the film to its strangely tragic and wonderfully concocted finale. The film was tad inconsistent in terms of narrative progression and content building, and Yukio’s performance seemed like a sore thumb. But, Yoshida’s beautiful muse Okada gave a compelling turn, brilliantly counterpointing the two men in her life and the ensuing ironies. The film’s most memorable aspects, however, would be its brilliant expressionistic photography with its visually arresting chiaroscuro lighting, and the accompanying melancholic score on a loop.

"The film’s most memorable aspects, however, would be its brilliant expressionistic photography with its visually arresting chiaroscuro lighting, and the accompanying melancholic score on a loop."

Yep, absolutely Shubhajit! I saw this last year and was mesmerized. Yoshida is a master class director, and hopefully one day he'll get the recognition outside of Japan that he deserves. Another exceptional, auithoritative piece!

Thanks a lot Sam. Given the brilliance of his films - stylistically as well as thematically - it really is unfortunate that he isn't as widely recognized as he should be. In fact I too discovered Yoshida only a few months or so back. I hope that, someday, he does get to be placed on the same pedestal, internationally, as the likes of Kurosawa, Ozu, Mizoguchi, etc.

In fact, to think of it, most Japanese filmmakers, even some brilliant ones like Imamura & his Japanese New Wave compatriots (Oshima, Shinoda, Suzuki, Teshigehara, etc.) are yet to receive the kind of international recognition that they deserve.