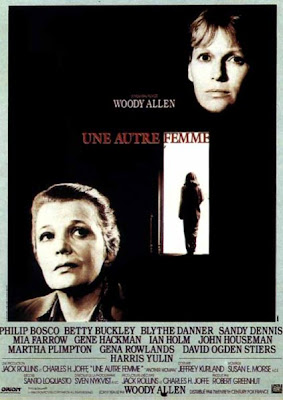 Though Woody Allen is immortalized for his witty and acerbic comedy-dramas, and to a lesser extent for his lighter comedies, he also made a few austere, ultra-serious dramas inspired by works of his idol Ingmar Bergman. However, but for a few exceptions like Crimes & Misdemeanors and Interiors, they – most notably September and Another Woman – have been met with critical disdain, which is unfortunate methinks. The film begins with Marion Post (Gena Rowlands), a successful middle-aged New York professor of philosophy, taking sabbatical leave in order to write a book. She rents an apartment in order to do so in peace, but, thanks to thin walls, ends up eves-dropping to the sessions of a psychiatrist next door. The ones featuring a depressed and suicidal lady (Mia Farrow) particularly get her hooked – so much so that they make her revisit her own failures and disappointments, and a much delayed attempt at reconciling with them. She realizes that a number of those she considered as close actually despise her, that her seemingly loving husband (Ian Holm) has moved quite apart, and that she is continues to harbor feelings for the man (Gene Hackman) whose love she had turned down. What emerged, thus, was a disconcerting and disconsolate chronicle of personal and familial dysfunction beneath the veneer of success, happiness and stability among the upper class. The degree of psychoanalysis in regular conversations was tad distracting, but it was possible to overlook them in this otherwise brilliantly enacted film. The host of cinematic devices, though seemingly derivative, was put to potent use – particularly a vividly portrayed dream sequence featuring the various actors in Marion’s life.

You may like this more than I do (seems I have felt like the critical majority for the most part)but I think the film is well overdue for another look. I only saw it once when it first premiered, and didn't go for an encore. Your sterling case is most persuasive. But yes, Woody has been a huge Bergman fan through his career.

Thanks Sam. Yes, like September, this has mostly met with negative reviews. I certainly would implore you to give it another try as I feel the overly negative it has received from most is a tad unfair to it, even if, admittedly, it certainly isn't one of Woody's best works.