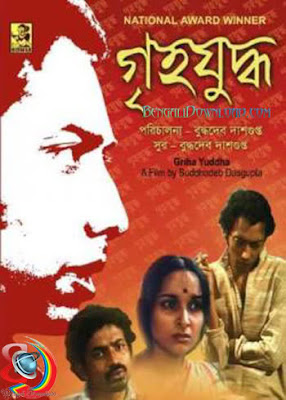 Grihajuddha, directed by the eminent Bengali filmmaker Buddhadeb Dasgupta, is a gritty political thriller set at the backdrop of the violent Naxalite movement in 70’s Calcutta. The storyline revolves on, to what lengths big business can go to eliminate factors that aren’t good for its bottom-line. Consequently, it might count among its inspirations such cult paranoia-laden political and conspiracy thrillers as The Parallax View and Three Days of the Condor. A giant steel company, which has its tentacles spread across various spheres of the society – police, newspapers, thugs, and whatnot, has eliminated Prabir, a popular labour union leader, by making his death look like an accident. This doesn’t just leave his family in tatters and in constant fear, Bijon (Anjan Dutt), an idealistic young associate of his, who was in a relationship with Nirupama (Mamata Shankar), Prabir’s smart and independent-minded sister, is forced to abscond leaving her in emotional disarray. In a parallel angle, Sandipan (Goutam Ghose), a young journalist, who has been given the task of doing a report on the incident, starts doggedly putting all the pieces together, leaving the powers that be in grave discomfort. Meanwhile, when Bijon finally returns to Nirupama’s life, much to her sadness he is now a disillusioned and cynical man comfortable in his well-paying job – and this starts creating a moral gulf between the two. The changing relationship between them as been portrayed with great maturity and subtlety, with the lovely Mamata Shankar turning in a nuanced and affecting performance. However, despite the powerful subject matter, the film too suffered a bit on account of ordinary editing and stilted flow of the narrative.

Interesting especially with those two points of comparison, and even considering the problems with some of the pedestrian filmmaking.

Yeah, I found the film's subject matter quite powerful & potent. As for the filmmaking, I guess the director was still in the process of coming to the terms with the medium, given that this was one of his earliest works.