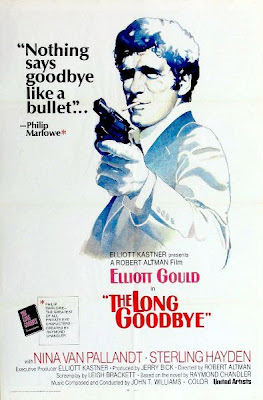 Robert Altman, an iconoclastic and one of the most fascinating filmmakers to have come out of America during the 70s, made a string of brilliant movies that challenged Hollywood and genre conventions with bravado. The Long Goodbye, his tongue-in-cheek adaptation of the renowned Phillip Marlowe novel of the same name by Raymond Chandler, was an irreverent take on and a terrific deconstruction of the film noir tradition. The convoluted plot deals with the iconic private eye, played by Elliot Gould, getting entangled into a bizarre situation when his friend is reported to have murdered his wife, disappeared with a stash of hot money, and later killed himself in a small Mexican town, and he ends up being hounded not just by the police, but also by a colourful and smooth-talking gangster (Mark Rydell). Meanwhile, he also gets acquainted to an enigmatic and strikingly attractive platinum blonde (Nina Van Pallandt) and her gruff and alcoholic husband (Sterling Hayden), and before long Marlowe starts getting the feel that the two threads are somehow connected. Gould gave a crackling and an immensely enjoyable turn as the chain-smoking, wisecracking, cat-loving gumshoe living a hilariously anachronistic life. Aided by fine acting by the cast and a lovely, lilting score, Altman created this wonderfully paced and scripted movie filled with off-kilter wit and deadpan humour, that served as an exquisite critique of its legendary central protagonist with his rather odd demeanour and completely out of sync with his changing times, as well as the city of Los Angeles where all the action takes place. Look out for a non-speaking, blink-and-you-miss early appearance by a young Arnold Schwarzenegger as one of the hoodlums.

Ha, Shubhajit! Maybe it's that 'convoluted' plot you speak of there that never allowed me to warm up to this film, leaving me at odds with most sane people out there. Repeated viewings failed to unearthed the magic that so many have experienced. Hence I completely understand your own appreciation, agree on John Williams' score.

As always, a marvelous capsule here!

Thanks Sam. I complete understand your reaction to this film, more so because I never managed to warm up to the possibly the most renowned movie on a Raymond Chandler novel featuring Phillip Marlowe, viz. Howard Hawks' The Big Sleep. Its another matter though that I loved the other Phillip Marlowe adaptation that I've seen - Murder My Sweet (based on Farewell My Lovely). As for the books, I liked all the three, with The Big Sleep being my favourite. Thanks Sam for sharing you opinion on this one.