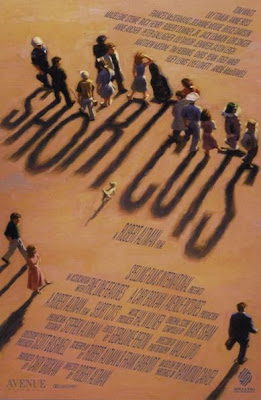 After a long period of critical and popular hiatus, Robert Altman hit the jackpot with ThePlayer, and that, along with the following movie, viz. Short Cuts, begun the final, and second-most fruitful phase of his illustrious career. Employing the similar complex and sprawling structure he made fascinating use of in Nashville, he adapted a collection of short stories by Raymond Carver for this trenchant, textured and incisive examination of the intersecting lives of 22 Los Angeles inhabitants over the course of a few days. Altman made excellent use of a non-intrusive, minimalist style and meditative tone (again, reminiscent of his 1975 masterpiece) to portray its motley characters – a wealthy TV anchor (Bruce Davison), with whose drone-like voice the film begins), his mild-mannered wife (Andie MacDowell), young son, and guilt-ridden estranged father (Jack Lemmon); a rich doctor (Matthew Modine) and his liberated painter wife (Julianne Moore); a beautiful housewife (Madeleine Stowe) and her philandering policeman husband (Tim Robbins); a promiscuous divorced mother (Frances McDormand) and her jealous ex-husband (Peter Gallagear); a depressive waitress (Lily Tomlin) and her alcoholic husband (Tom Waits); a lonely middle-aged jazz singer (Annie Ross) and her cellist, self-destructive daughter (Lori Singer); a smooth-talking make-up artist (Robert Downey Jr.) and his besotted wife (Lili Taylor); a docile man (Chris Penn) and her vivacious wife (Jennifer Jason Leigh) who earns a few extra bucks through phone sex; a self-employed man who loves fishing (Fred Ward) and his fragile wife (Anne Archer) who works as a clown; et al. Brilliantly acted and comprising of a terrific soundtrack, this rich tapestry of diverse and myriad interconnected lives, was a disturbing, cynical and darkly funny critique of such themes as family, love, guilt, infidelity, loneliness, broken dreams, and loss.

There are several fascinating vignettes, the performances are uniformly excellent, and the realistic approach intensifies teh drama. As I recall some stories are better than others, but all in all it's still another significant achievement for Altman.

Yeah, I completely agree that some of the vignettes were superior than the others. The one involving the Jazz singer & her suicidal daughter - that would rank as my favourite, followed by the Tim Robbins-Madeiline Stowe one. And Jack Lemmon's monologue too would be right up there. Altman did a really terrific job in smoothly binding such diverse stories & characters into a seamless whole.

Thanks Sam for stopping by.