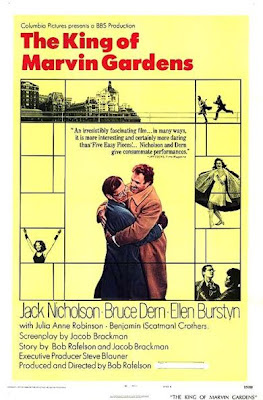 Coming right off his terrific examination of existential crisis and alienation Five Easy Pieces, Bob Rafelson’s The King of Marvin Gardens shared number of observable resemblances with the former –thematically, tonally and stylistically. Its themes of urban disillusionment, ennui and homecoming, along with its downbeat mood, leisurely pace and under-dramatization, harkened its viewers to the earlier movie which had become a cornerstone of 70s arthouse American cinema – possibly one of the reasons for the rather unfairly diluted response it gathered upon its release. Jack Nicholson gave another measured, layered and brilliantly restrained performance against his type here in his startling portrayal of David, a late-night radio solo-talk show – an introverted guy whose repressed alter-ego comes alive when alone with his headset, who goes to Atlantic City, against his good judgement, to be part of a sandcastle plan of his gregarious younger brother Jason (Bruce Dern). Over the next few days in the city of big and hollow dreams, he gets to mend his strained relationship with Jason after many years, and gets acquainted with two ladies with strikingly opposite personalities always accompanying Jason – Sally (Ellen Burstyn), a former beauty queen with a shallow and vulnerable personality, and her pretty but subdued stepdaughter Jessica (Julia Anne Robinson). The overtly ambitious dream that they become part of, and the complex and uneasy dynamics that the four share, inevitably lead them to tragic consequences, with David returning to his morose and lonely existence with his grandfather in Philly. Despite its depressing content, the exquisite camerawork that made the two cities seem alive, and fine performances, made this a surprisingly liberating watch.

Yes indeed Shubhait, the film does indeed show striking similarities to Rafelson's earlier film, but the difference is that FIVE EASY PIECES is a masterpiece and this film falls a bit short. Still, it is an impressive film for the reason who attest to here, particularly for Rafelson's measured direction and Nicholson's extraordinary performance. This is part of the excellent blu-ray set with FIVE EASY PIECES and THE LAST PICTURE SHOW.

Absolutely, Five Easy Pieces was a masterpieces despite its underrated status vis-a-vis some of its more popular contemporaries, while this fell slightly short of the former's dizzying heights. Also, the sense of deja vu that one gets (provided he/she has watched Five Easy Pieces) on account of the similarities, too, is a bit of a dampener. But I'm glad that you agreed that, at the end of the day, this is a very good film, and that Nicholson's performance is also brilliant to say the least.