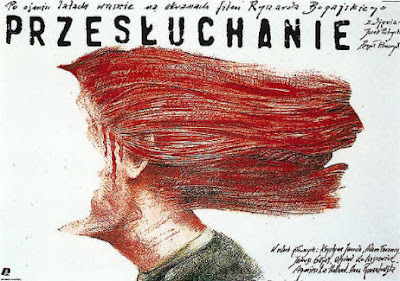 The Polish film Interrogation, like so many movies made in the Eastern Bloc under draconian regimes, was banned immediately upon its release. Ryszard Bugajski, who has made it by borrowing money from his friends, resorted to underground distribution of its copies as it got a proper release a good 8 years after it was made. The film remains, to this day, one of the most harrowing portrayals of imprisonment, and the subsequent dehumanizing torture, both psychological and physical, of an innocent victim, by the state police, in order to extract a false but convenient confession; its theme and content remain disturbingly relevant even to this day. The aforementioned victim is Tonia (Krystyna Janda), a promiscuous cabaret-singer who, after binging on alcohol one fateful night, finds herself waking up locked up in a dingy cell with inmates as company and no reasonable explanations forthcoming. From that point on her seemingly carefree life gets irrevocably altered for the worse, with her desperate pleas, over the course of next several years, slowly getting transformed into rebelliousness, civil disobedience, and finally acceptance of what is left of her thoroughly shattered life. Though Janda’s performance seemed a tad over the top in the first one third of the movie, by the time the credits rolled I was left spellbound by her incredible portrayal of her character’s frightening and heartbreaking transformation. Adam Ferency gave a marvelous supporting turn in the complex role of her interrogator with whom, over the years, Tonia develops a strange bond. This unflinchingly bleak and deeply political film remains a devastating account of one of many horror stories in Stalinist Poland.

Congratulations for blog. It is very interesting. Bye!
Alex
366filmesdeaz.blogspot.com.br

hi impressive blog.
We have a big website to sale cars online throughout Myanmar. Please visit us back at: http://motors.com.mm/?utm_campaign=mot_mm_lb_blog_phung&utm_source=mot_lb_blog&utm_medium=lb_blog

Yes it certainly is one of the most harrowing films of imprisonment, Shubhajit, and it is not an easy film to sit through. Janda gives an electrifying transformative performance in this acute and uncompromising work. You have again illuminated a film work with your singular insights!

Thanks a lot Sam. The harrowing experience for the viewers is exceeded only the one by the characters - yet, there was also something extremely liberating about it, in its uncompromising portrayal of injustice, courage & acceptance.