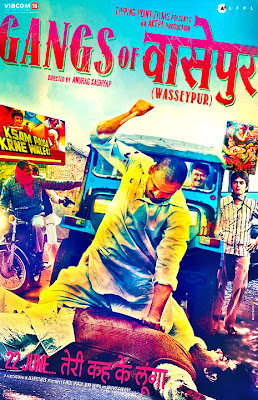 The 5-hour epic based in the badlands of Wasseypur (part of the Indian mining town of Dhanbad), of which Gangs of Wasseypur is the first half, is designed to be the magnum opus of maverick filmmaker Anurag Kashyap. Though a gangster film with its principal motifs being power, revenge and lust, Kashyap endowed its scope with epic proportions by making this also a sprawling saga about the rise and evolution of gang violence on the backdrop of historical and political changes over half a century. When Ramadhir Singh (Tigmanshu Dhulia), the nouveau riche owner of a colliery murders his principal henchman Shahid Khan, on being apprised of his gargantuan ambitions, it sets into motion a tale that would take shape years later – in the form of Sardar (Manoj Bajpayee) who has vowed vengeance to avenge for his father’s death. While on one hand this is a chronicle of how he becomes a feared gangster by taking on Ramdhir, who is now a powerful politician, along with a butcher cum local goon, it is also a tale of his unconventional family life – balancing his foul-mouthed first wife (Richa Chadda) and children, with his blind attraction towards his brazenly voluptuous mistress (Reema Sen). Piyush Mishra, with his unique vocal style, acts as the film’s narrator and moral backbone. Though highly entertaining on account of the no-holds barred language, wacky humour, over-the-top filmmaking and fine performances, its over-ambitious scope and Kashyap’s extreme self-indulgence did some damage to what this labour of love could have been. As a result, despite a nice first half, it suffered from being overlong, repetitive and distracting in the rather dull second half.

GOW 2 is more interested and power full than first part, but only if you like bloody fight shots and high voltage action, its real Hindi movie where no western costume and foreign location are there, it has some lovely Gallis which make you laugh. Nawajuddin Siddiqui is a brilliant new comer. Anurag Keshap direction is outstanding. please make sure you watch this film only with friends not with family.

Thanks for sharing your views & the advice. I've already watched it though (saw it today itself), and shall be writing about it in a few days (after I've cleared the existing backlogs).