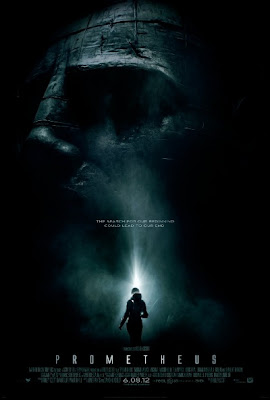 Ridley Scott made Prometheus as a prequel of sorts to his groundbreaking outer-space horror film Alien; however, its scope wasn’t limited to just that as Scott designed a much broader canvas for it. Consequently, it was alternately similar to and divergent from the earlier sci-fi classic – both thematically and aesthetically. A group of people with diverse skills, based on a discovery by a pair of scientists (Noomi Rapace being one of them), have boarded a humongous space ship in order to undertake a fantastic voyage to a far-off planet in some far-off galaxy in search of the origin of humankind. But, upon reaching the said planet, they do not just get apprised about their evolutionary secrets, but also get attacked by a brutal and a nearly undefeatable extra-terrestrial species. Giving them company are, an icy blonde (Charlize Theron) who represents the company sponsoring this voyage, and a straight-faced robot (Michael Fassbender) whose intents might not really be straightforward. The film had its share of fine moments and noteworthy traits – it began well with an impending sense of mystery and doom, the scenes involving the aliens were chillingly accomplished, the frosty dynamics between the ‘employer’ and the ‘employees’ was very well established, and the 3D graphics was praiseworthy. However, its biggest undoing lied in Scott’s over-ambitious attempts at turning it into something overtly grand, perhaps stemming from his latent desire to emulate the likes of 2001: A Space Odyssey and Solaris, instead of restricting it to the cold-blooded chills of Alien with the right proportion of philosophical undertones.

Hmm, seems as if I liked the film a little more than you…I gave Prometheus 7.6 in my monthly review post.
I agree about performances and in terms of suspense, but a weakness was how unprofessionally the “brilliant” scientists behaved.
The big questions to me are tacit as with Blade Runner, and as you imply are a bit “forced” in Prometheus. However I welcome an intelligent sci-fi experience, because happens so rarely for blockbusters.
The innate problem with prequels is we already know the universe, and therefore the films lack the freshness and surprise of the original.
I can’t think of many great prequels. Except Godfather 2, and maybe Indy temple of doom, or X-men first class. It’s a shortish list...
Maybe too many characters in Prometheus, so tough to care about them, when they have so little screen time?

Well, its not that I disliked the movie; as I mentioned in my review I did like certain traits & aspects about it. However, what could have been a really good & memorable sci-fi film (indeed a rarity as you aptly remarked), was slightly marred by Scott's overdoing the script's philosophical rant. In fact, though there might have been a sense of deja vu had he completed gone the Alien way, I personally would have preferred just that - an earnest & undiluted prequel to it. And yes, I too can't think of many memorable prequels. Thanks Chris for sharing your views on Prometheus - I'll check out your review soon.

Shubhajit, I must say I am definitely on the same page as you are with this film. The film does reach too far, and because it's hampered by a weak script it never reaches the level of films like ALIEN, which some had compared it to. It's certainly well designed and it has some big moments though. Excellent capsule review!

Thanks Sam. Yeah, the movie did have its moments and parts of it were quite interesting too. But, as you rightly pointed out, by aiming for too much & too high Scott left the viewers a bit underwhelmed. A tighter approach like in Alien would have yielded better results methinks.