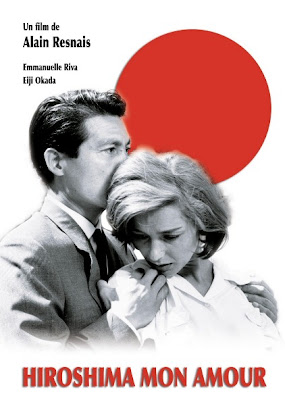 Hiroshima Mon Amour, considered a seminal arthouse classics of world cinema, established Alain Resnais, a documentary filmmaker until then, as one of the most original filmmakers to have emerged during the French New Wave. Alternately an intellectually challenging and an emotionally invigorating work, this near-oblique, aesthetically complex and deliberately paced avant-garde film was a Tarkovskian meditation on time and memory. The movie’s central protagonists are, a French actress (Emmanuelle Riva) who is in Hiroshima to be part of an anti-war documentary, and a Japanese architect (Eiji Okada) with whom she has become involved in an extended one-night stand during her stay there. Both the nameless characters, despite their seemingly mundane lives, are still recovering from emotional scars suffered during their respective pasts – she, the ordeal of occupied France during World War II, and he, the devastating aftermaths of the dropping of ‘Little Boy’ by the US in 1945. The movie begins in a non-descript hotel room one night, and over the course of the following day and night the viewers are apprised of the losses and ensuing disillusionments that have shaped the lives of these two deeply melancholic and lonely human beings. The circular narrative alternately shifted between past and present, and between reality and dreams, with hypnotic monologues as accompaniment, thus making this beautifully scored and photographed tone poem an audacious demonstration of the techno-philosophical capabilities of cinema.

"The circular narrative alternately shifted between past and present, and between reality and dreams, with hypnotic monologues as accompaniment, thus making this beautifully scored and photographed tone poem an audacious demonstration of the techno-philosophical capabilities of cinema."

Geez, Shubhajit you certainly do say it all here and most insightfully! There are some who consider the film as cinematically revolutionary as CITIZEN KANE, much for the specifications you document here in this excellent piece. In any event this is one of the most important films of the French New Wave.

Thanks a lot Sam for the appreciation - you're too kind as always.

Yes, I too have been reading some really scholarly articles on this film where, according to those film writers, this was nothing short of groundbreaking - and not just for its modernist approach & deeply philosophical content.

As I mentioned in my review, I found Resnais' approach (in terms of content, theme, pacing, structuring, tonality, etc.) highly reminiscent of Tarkovsky's films. In fact I'd love to read more about this film from that front as well.

Couldn't have said it better, buddy. We love this stunning work of art too. The relationship between the leads feel so realistic and sacred we dreaded the ending. Did they go their different ways? Did they remain together? We'd like to think they did...how bout you?

Great to hear from you after a long time, hope everything is fine at your end!

Yeah, the sense of ambiguity pervading the film's narrative was one of the most alluring & striking features of the movie. Well, the sentimentalist in me would like to believe that they remained together, but the logical bent of my mind asserts that they didn't :)