(Cinemascope thanks Ms. Camiele White for this delectable peek into the dark and cold world of vengeance in cinema, using three films belonging to diverse genres to bring forth this fine and incredibly personal article)

Though it may be bad form to start an article with the ever fluctuating, yet astonishingly grammatically incorrect vernacular of the Twitter generation, I must preface this article with a very audible and heart-heavy *sigh*. This has been quite a month for me, dear friends, a month in which the reaffirmation of my susceptibility to being taken advantage of and betrayed has carved a mark in my psyche with full force and from all sides.

That over-dramatic, borderline Maudlin, peek into the sickly smudge that has been my life as of late segues perfectly into the post that I’ve wanted to write for quite some time. There’s no greater medium than cinema to vividly express those emotions that we audience members feel. Music is my life, poetry my livelihood. But I recognize the potency and immediacy of the moving picture as much as the next long-winded ghost-writer. One of the most important and visited themes is revenge. 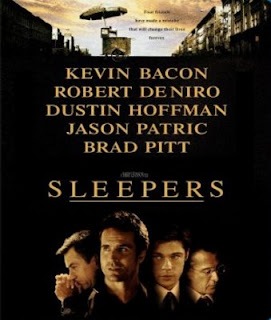 The first time I ever experienced this rush of needing to slake one’s lust for vengeance was when I was very young. In fact, it is this film that triggered my necessity to write out my anger before some unfortunate bystander felt the wrath of my hypersensitive emotional state. The film Sleepers, though based on a true story, draws much from the ultimate revenge tale, The Count of Monte Cristo. It’s that poetic cadence, “sweet lasting revenge”, which drives the film and ultimately leads to one of the most elaborately planned revenge tales ever set on screen.

Imagine yourself in the shoes of the victimized – their lives left cragged and splintered by the pain of betrayal from authority figures. Sleepers pretty much set the pace for any revenge film that I’d see after it. The utter feeling of helplessness at the hands of men who are sworn to protect you and keep you out of trouble… try being a functioning member of society after being subjected to something that you’ve always had to bury within you, the scorch of the secret burning a pussing sliver into your soul. For John Rilley and Thomas Marcano, the life after being imprisoned in a stony-lined hell of degradation and abuse has not been kind. They kill at will or on command with no remorse, no real connection to life.

Their more fortunate childhood friends, Shakes and Michael, have managed to bury the past deep enough to move on. However, Michael has been festering in his anger, waiting for the perfect moment to exact his revenge and seek solace for his weary spirit. As a well respected young lawyer in Hell’s Kitchen, he’s ready to take his reputation and his skill and throw them into the gutter for the sake of getting his and his friends’ due justice, opening the closet door housing the bogeyman that did irreparable harm to their youth and their ability to grow up in peace.

This tale of vengeance and justice is ripped clean from the pages of Alexander Dumas himself and gives living colour to the bitterness that one must harbour in his very limbs every day of his walking life. It’s this heat and fire that gives this film its potency, thrumming with potential energy stored within every fibre of these young men’s beings. 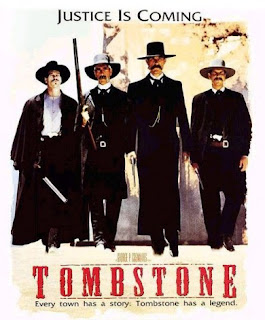 Of course, as with love, revenge comes in many shades. The line between the two almost blur to a smudged sort of passion, indistinguishable emotions that carry all the heat and ire of broken hearts and shattered spirits. With love, the fire within the pit of your stomach for the object of your affection never dies, only billows like so many clouds of smoke. When for the sake of avenging those who hold the biggest portion of your heart, revenge is as ferocious as a rattle snake, sharp and biting, sticking its fangs in the bringer of your love’s pain and rooting out life until it’s a pulping mass of nothingness in a stagnant pool of water. Such was the case in the western Tombstone.

Barring the time period, the fact that he’s a historically iconic figure and peacemaker, Wyatt Earp and I have much in common. We both feel an unwavering sense of duty towards our families, our dearest allies are snarky drunks with wit sharper than a katana, and our younger brothers are the most important parts of our universes. Of all the things anyone could do to me, the only thing that pushes me past the point of reasonable thought is if any harm at all is inflicted on my younger brother. Thus when Wyatt Earp goes on his killing rampage of anyone resembling a Cowboy (the harbingers of all things destructive and callous), I easily justified it as an act of a man pushed passed his limits of tolerance. There’s not a body I wouldn’t exorcise of life if ever a hair on my brother’s head was harmed at the hands of another. Doc Holiday, Wyatt’s closest confidante, said it quite brilliantly, “Make no mistake. It’s not revenge Wyatt wants. It’s a reckoning.” 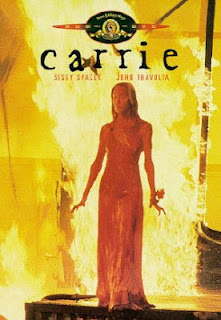 Then, once I fall back to a time that never seems to bring me anything accept heartache and a throbbing anger, the only film that can measure up is Carrie. Obviously high school was a bevy of experiences, ranging from the most incredible four years for some and some of the most tumultuous for others. If what precedes isn’t enough indication, my high school life erred on the latter side of the spectrum. Well, more it was lonely and full of falsities that even at that age I could sniff out and realize what they were. However, insecurity and loneliness allow you to ignore the obvious and hope that someone will willing reach out and be a genuine source of peace and, dare I say, happiness.

Carrie was a young girl sheltered and in desperate need of someone to take her hand and lead her into a new image of herself. However, her solace came in the form of learning telepathy, giving her autonomy over her life and its circumstances unlike anything she’d ever felt. The power coursing through her body gave her the confidence that maybe, just maybe, she deserved a bit of respite from the pain she’d suffered at the hands of her peers and her zealot mother. The moment she feels she’s finally been accepted, after winning the rigged prom king and queen contest, her world implodes, the rage manifesting itself in a massacre of her senior class.

The iconic prom scene that’s been etched in my mind as one of the most frightening, as also is one of the most resonant. I find myself easily able to slip inside Carrie’s walls, embrace the pulsating heat and pain within the confines of her fleshy albatross, and look deeply into those eyes, wide with bloody heat and anger. The last 20 minutes of the film are the most apt to my life leading up to this very moment because every wrong done to me, every lie and slap in the face is so calculatedly disassembled and left pulping in its own deceit. As such, Carrie remains one of the most frightening films I’ve ever seen as well as the sincerest reincarnation of everything that I’ve come to know in my life.

And that’s what this was about -- relinquishing the anger, exorcising demons, freeing my soul of an ever winding vice. These three films managed to take vengeance to a place that I’ve always been fascinated and wary of -- eyes wide, wildness prevailing where calm should reside. There’s a moment when somewhere inside all of us, laying dormant and waiting to bubble to the surface of our skin, in which the world stops and all we see is white anger, a burn that sears its way into your essence until it burns away every other part of us. Until that fire is allowed to spread itself through you and exhaust itself, you’ll always feel it clawing at you, begging for release. These three films showed us the extent of that escape, how it can manifest itself as a calm plan of justice, heated reckoning, or a flame licking expulsion of any and everything that’s ever done you wrong.

Camiele White suffers from too much film information. In order to remedy her psychosis she’s decided to write about it. Right now, she’s trying something a bit different and writes has her own blog called Madasa Writing. If you want to engage in a little conversation (at your own risk) she can be reached at cmlewhite at gmail [dot] com.

Terrific reflections here bringing in three films that have amassed many fans. I am not admittedly the biggest fan of SLEEPERS, but I certainly would have strong positive feelings for both CARRIE and TOMBSTONE. You incorporate a fascinating personal touch into the film reviewing proceedings here!

Thanks Sam for appreciating this wonderfully written article by Ms. Camiele White.