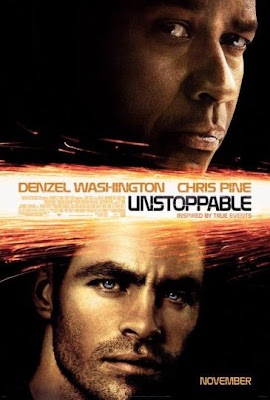 Unstoppable has Tony Scott at his gleeful best or his woeful worst, depending on your point of view. As many critics have pointed out, the film is over-edited, and uses far too many cameras and camera angles than ought to have been necessary. Yet, despite its flaws, the film also happens to be a high-octane, hyper-kinetic thriller, and unapologetically entertaining. The story is about a runaway train with a truckload of deadly chemicals on board – a recipe tailor-made for an edge-of-the-seat disaster story. Denzel Washington, as a middle-aged, veteran, and about to be released train driver (engineer), who decides to defy the pompous authorities by engineering in a jaw-dropping rescue mission, is reason enough to watch the film. He has as his partner a rookie conductor with severe marital problems, played by Chris Pine. The most notable aspect about the film lies in its simple premise, which is a deviation of sorts given who the film has been directed by; and that, in my opinion, happens to be the strongest aspect about the film, as it gives enough provision for us to know the two protagonists, get engaged in some scintillating train-chase sequences, and yes, cheer for the two outsiders on an impossible mission. The film is not about messages or class or a lasting effect; hell, it is essentially the kind of film made for people to watch with cola and a bucketful of popcorn in one’s hands. Yet, despite its lowbrow appeal, the film is also entertaining, ably aided by an old school script and great tension build-up.

Unstoppable was entertaining, agreed.
But it did take a little off my experience that it was similar to 1985’s Runaway train, which I still prefer, as the characters are more edgy/on the run, and the story seemed a touch more unpredictable.

Well, I haven't seen Runaway Train, but given your endorsement, I'm now interested in seeing it. But comparisons aside, yes, one could always predict the way the film would end, but I reasonably like the process and journey before the climax scene finally arrived. And well, Denzel Washington did the rest :)

Don't you think, you are rating movie quite high these days ? I have read each of your reviews in this blog, that is why feel disappointed to see this movie with many great movies on the scale of rating.

Well, you could say that, cos I sometimes do tend to be very liberal with ratings. But, at the end of the day, cinema is a very subjective thing, and I found Unstoppable very entertaining and engaging. You might argue that I've given it half a star more. Anyway, great to know that you've read most of the reviews here at my blog. Thanks a lot.