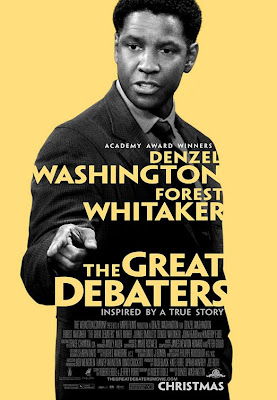 The Great Debaters is a classic example of an underdog story, yet its premise has managed to separate it from the horde of similar films that Hollywood offers with great regularity. It is about a group of African-American students, studying in an all-Black college, called Wiley College, located in the then-racist state of Texas, in an age when racial discrimination and intolerance was as widespread as it was absolute. And these young students, under the guidance of a well-read and openly rebellious teacher (and a fiery speaker himself), forms an all-conquering debating team. By the time they get to debate the students of Harvard University, within the premises of the hallowed institute, we know how the film will end, yet the passion with which the speakers go about their job, one cannot but cheer for these underdogs on the path of making history. The film is well-acted, and melodramatic moments have been largely kept under bay (though they do show up from time to time perhaps to up the audience’s emotions). Denzel Washington didn’t just helm the film as its director, he also enacted the role of the volatile, angry, passionate and inspirational teacher; though in a supporting turn, his is integral part of how a bunch of kids, with problems of their own, turn into a brilliant debating team, and in the process end up playing significant roles in the history of the African-American community. As a critic aptly opined, it might be at the end a feel-good film, but it certainly wasn’t a run-of-the-mill film, and did do more than a commendable job portraying the social context that played a key role in the "based on true events" storyline incisively.

I didn't dislike the film, and I appreciate your persuasive testimonial here, but I did see some formula that followed some other films in this genre, Shubhajit. Yet, it's all innocuous enough, and if you submit to it, the ideas here should offer some academic inspiration, and certainly some entertainment. This is quite a superbly-written extended capsule.

Well Sam, I can sure understand your point of view. It was the kind of film that one could as easily fall on one side of the fence as on the other in terms of reaction to it. I agree there was some amount of formula in it; in fact, as I said, it wasn't too difficult to guess the ending. But I still found the movie to be reasonably well made, and had some amount of conviction in it too.

At the end, you feel you had a good time watching the film, but while I was watching it, I found the pace very dormant in some of the parts...

Yes, the film is a good watch, and Denzel Washington is excellent as always. Agreed, the film isn't flawless, but on the whole I was reasonably okay with it.

I loved this film!