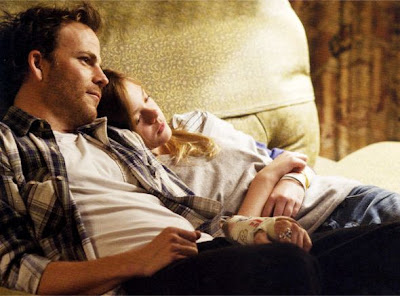 Somewhere, Sofia Coppola’s latest film, is not just an intensely character-driven film, but also a well-etched character study. A critic compared this film's theme with Darren Arnofsky’s The Wrestler, and I must say that I agree with it. The film is about a lonely, successful celebrity, who lives life king size. But, despite the gratuitous excesses that define his life, he also suffers from ennui and emptiness. Johny Marco, played with great care and precision by Stephen Dorff – a defining role for his career so to speak, is an extremely popular and filthy rich movie actor, who lives in a huge suite at a luxury hotel, and drives his Ferrari with abandon. But the stream of activities that define his meaningless, carefree existence, suddenly screeches to a halt when his 11-year old daughter Cleo comes to live with him, and though subtly, he suddenly starts finding his life to be better off. The film is a slow-paced examination of how this father-daughter relationship transforms him and he again starts realizing the small things that make life worth remembering and living. Okay, the film might not engage all its audience, and the director’s self-indulgence is also evident at times – some of the scenes, like the pole dancing scenes and the one where Cleo is practicing ballet skating, seemed overlong and could have been ended once the point was made. However, the film is also quietly melancholic and gently affecting, and has managed to go well beyond the conventions and boundaries of the plot.

It's tough backing up a break through film like Lost in translation. Some will complain it's not similar to her last, others will berate it for being too similar and not original enough, so in that sense S. Coppola can't really win. I never made the connection about The Wrestler, will keep that in mind when I get to see 'Somewhere', somewhere ( :

But, having said that, I'd say do give Somewhere a try, as I'm sure you'll like it. And as for the connection with Wrestler, the principal one is turning someone who's hardly ever considered a very good actor earning that recognition as the respective protagonists in these films. There are some thematic similarities too which I wouldn't like to spell out before you watch the film.

I'll have look at your Top 10, and will leave my humble opinions in the comments section. Well, I don't have any such plans as of now as I'm nowhere close to watching all the acclaimed films of 2010. I see you haven't restricted only to films released in 2010, and that a great idea I must say.

Shubhajit: I will give this film a chance, but up until now have stayed away, due to my indifference to Ms. Coppola's work, especially LOS IN TRANSLATION, which I always found static and pretentious. But things need to be evaluated on their own, and you certainly make a sound and lusic case in your typically excellent capsule. I will see it soon and then I'll compare notes.

Thanks Sam. Well, as I mentioned above, Lost in Translation doesn't rank among my favourite films either, despite its critical fame. Nonetheless, as you so astutely noted, every work must be judged on its own. Its great that you're willing to give this movie a chance. I would be interested to read your observations on it once you've watched it.