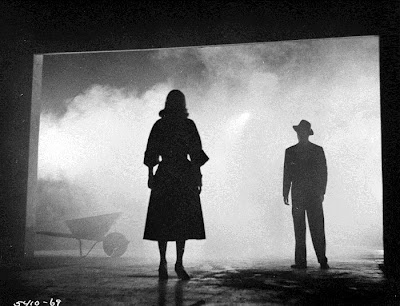 If I were to make a list of archetypal film noirs that I’ve seen, The Big Combo would surely find a place in it. The film is about a cop’s obsession with bringing down an organised crime boss against all oppositions, while at the same time being, on some Freudian level, in love with the mobster’s beautiful and emotionally vulnerable fiancé. The film was way ahead for its time, as it contained a heavy dose of violence – the film contains one of the most innovative torture scenes one can imagine – and palpable sexual undercurrents. Cornel Wilde, as the tough as nails cop, was very effective, as were Richard Conte as the menacing, smooth-talking gangster, and Jean Wallace as his moll. But the most unforgettable part of the film undoubtedly happens to be its photography and cinematography. The canted camera angles, the high-contrast shots, the silhouettes and the arresting chiaroscuro haven’t just given us some truly iconic cinematic moments (as in the devastatingly beautiful final shot), it also managed to portray the seedy and sordid with such style, composition and élan that one can almost call the film poetry in motion, albeit a very bleak, dark and disturbing one. The film’s terrific opening soundtrack too managed to play its part by creating the fervent, feverish mood and the perverse, nightmarish atmosphere. Yet, for all its poetic beauty and sadness, it also remains an engaging and gleefully unpredictable hardboiled thriller.

Yes, it's poetic an dviseral and ahead of it's time, and yes, the leads are electrifying. This is one noir, Shubhajit, that for the longest time was rather underestimated, and even today there hasn't been a legitimate DVD release. But we are lucky with this one as the public domain disc is quite good all things considered. Yes, that torture scene was unforgettable, and there is most definitely a 'sexual undercurrent.'

This is really a fantastic capsule. You pushed every right button, mthinks!

Thanks a lot Sam for the appreciation as well as your eloquent appraisal of the film. I was really bowled over by the film, and really hope that it gets its due recognition & finds a permanent place among the pantheon of great film noirs.

John Alton was key to the visual look of noir and this is one of his greatest works - every shot seems to count for something; an exercise in visual economy.

Absolutely Omar. This film was as much DOP John Alton's as it was its director's. The photography played a major role in making this film such a classic.

I adore this film: the cinematography, the acting in every role, the envelope-pushing scenes, the brief comedy, the trianges and obsessons and everything about the ending scene. When I watch it, I end up watching it again and then surf the net for commentaries like this one.

Thanks a lot for sharing your love for The Big Combo. I'm completely with you as regards to your views on the film. If I were asked to name 2 things that stood apart for me, they would have to be the film's dark themes of obsession, and the incredible cinematography.

Specially the scene where Richard Conte kisses Jean Wallace (she is facing the camera) on the face and neck - then the camera remains on the girl and not on Conte, the implication is very clear and daring and against the then existing Hays Code- but since nothing was actually shown, the scene was not cut

Absolutely! I remember the scene you're referring to - that sure was a brave move by the director as the implication, as you noted, was perfectly clear, and hence might easily have run afoul of the then Hays' Code.

Ylthe conematography is great, but to me the most memorable feature is Richard Conte as Mr. Brown, who made a list of favorite characters I composed last year. He just nails charismatic evil.

Yeah, indeed - he was the most slimy bastard in his role as the gangster, and Conte did a wonderful job in ensuring that his character never became one-dimensional, as villains often tend to be. And that torture scene - whoa! I mean, that would rank amongst the most innovative torture scenes I've ever seen.