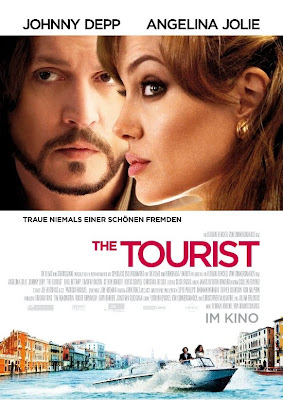 Seeing the presence of Henckel von Donnersmarck’s name during the end credits caused me to wonder – was The Tourist, the movie that I’d just watched, directed by the same man who made a powerful debut with Lives of Others! There’s no denying the movie had the capability to rise above the numerous thrillers that are produced by Hollywood’s assembly-line, and the presence of Angelina Jolie and Johnny Depp in the star-cast really had make me feel that this would turn out to be different. The film started out well, and the scene where Jolie meets Depp on a train through European countryside was both smart and ingenuous. Nonetheless, this story of Depp being thought of as an internationally red-flagged criminal who has stolen around 2 billion dollars from a British gangster, didn’t manage to be anything special. So while Depp finds himself on the run, he surprisingly gets help from Jolie (well, at least the audience wasn’t surprised at that), who used him in the first place to shift attention from herself, and ends with the two falling in love along with a couple of rather ludicrous twists thrown in for good measures – well, the movie sure turned out to be a disappointment given the engaging first half. The gorgeous screen-captures of Paris and Venice, and the presence of these huge stars, might have made our stay in theatre less painful than would have otherwise been.

Well, this film, though different from the regular thrillers, failed to inspire.

Somewhere down the line, lost in the making or something like that, a good plot lost into a average film.

Happy New Year to you.

Yeah, exactly. The film did have the potential, but never managed to reap that. Consequently, the outcome was totally disappointing. Thanks King Viswa for the wishes, wish you to a Happy New Year.

I haven't yet watched this film Shubhajit, for the very reasons you pontificate on here in this review. I consider Von Donnersmarck's THE LIVES OF OTHERS as one of the best films of the past decade, and was disheartened to read all the negativity, though the appearance of Depp is normally cause for some kind of celebration. Seems like your review is more in the mediocre range, which doesn't inspire any altered resolve, but at least takes it off any 'worst films of the year' lists! Ha!

A very Happy New Year to you and yours Shubhajit!

Thanks Sam for stopping by. Yeah, it was very disheartening coming from the guy who made Lives of Others. And yeah, with Depp in it, expectations were on the higher side. Great that wise sense prevailed for you and you chose to give it a skip.

Yeah, I think it wouldn't qualify as the worst film of the year. But then, this film's still quite a climb down for the director and the actors :)

Thanks Sam and wish you too a very happy new year!

I haven't watched the film and nor do I intend to but it is sad to see the choices Depp has been making as far as films are concerned. One more Pirates film is coming next year. He isn't really challenging himself with roles any more which is really disheartening. He has done some stuff but he hasn't pushed it like he used to. It will be interesting how 2011 goes as he has a couple of films which may turn out to have interesting roles. I am not very hopeful though. I wish for the days of Edward Scissorhands and Blow but they seem a distant past. He is a tremendous actor and I want to see him push himself which he hasn't been doing for a fair while now.

Thanks for sharing your opinion on Depp. Well, he's a very good actor, if not a great actor. I prefer Brad Pitt the actor any day against most of his contemporaries, and he continues to do highly interesting films. Coming back to Depp, yeah he has become a tad repetitive, and even here, the way he talked and ran seemed he's still suffering from Jack Sparrow hangover, or maybe with yet another movie in the lucrative franchise coming up, he doesn't want to get out of the mould. Yes, like our very own Amir Khan, I'd like Depp too to get back to the kind of roles that made his a superstar and a respected actor in the first place.

It's a shame that Henckel von Donnersmarck is already moving to a big-budget Hollywood movie after such a great debut. When I saw that he was directing this from someone else's script, I was less excited to see it, and from the trailers and reviews it sounds mediocre. Hopefully his next feature will be an improvement!

Yes, you've said what we all are thinking. After such a stunning debut, Donnersmarck's moving in the direction of conventional Hollywood blockbusters is a shock for all. Yeah, maybe he'll realise what he has done and ensure a better picture next time. Thanks Alex for posting your views.

This one is pure eye candy.

I did enjoy myself while watching, but I knew it was nothing special. Just typical popcorn fare.

Great that you didn't have any expectations from the film, which essentially means you weren't as disappointed by it :)