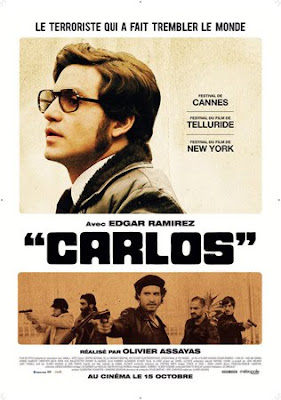 To call the acclaimed French filmmaker Oliver Assayas’ Carlos an epic would be an understatement because, its 5 ½ hours length might seem formidable even to those accustomed to watching epic films regularly. The film deals with the rise and fall of the infamous political assassin Carlos who, as we all know, is now languishing in prison. Employing incredible research work, the film has pieced together the life of one of the most enigmatic persons of the last century through terrific storytelling. The director has resorted to cinema-verite, giving the film the feel of a documentary. Thus, by being ripped off of any unnecessary melodrama and by being a fiercely honest portrayal of the man without any ounce of judging him, the film has succeeded in making Carlos seem like a frighteningly real man of flesh and blood. Divided into three parts, this episodic portrayal of the infamous terrorist’s rise through the ranks, his attempts (which often are successful) at some outrageous and spectacular acts of violence, his pop-culture celebrity-hood, his comparative stagnation after being ousted from the Palestinian group he was part of, and finally his slow decline after massive changes took place in the world order post the collapse of Soviet empire. Edgar Ramirez has given a tour-de-force performance as Carlos in this visceral, violent, anarchic and thoroughly outstanding piece of work.

The best film of 2010 that I've seen so far. I caught the long version on the Sundance channel in three easily digestible parts and saw hardly a wrong moment. Glad to see more people recognizing its quality.

Yeah, it sure would rank as one of the best films of 2010, if not the best, of what I've managed to see. I too watched the long, 3-part version, and was bowled over by it. Thanks a lot for stopping by, Samuel.

"Edgar Ramirez has given a tour-de-force performance as Carlos in this visceral, violent, anarchic and thoroughly outstanding piece of work."

Certainly, Samuel is not far off with that assessment, as CARLOS also made my own top 3 of the year. Seeing this film may well have been the biggets highlight for Lucilel and I over the past 12 months as we luckily got to speak with Assayas for about five minutes in the lobby after the epic roadshow version you review here. Naturally, Assayas argued for the longer version, as any director would, and enlightened the Q & A audience with some other interesting facts. In any case, you've sized up the film here superbly, and I can say that Assayas succeeded where Soderbergh failed. CARLOS was riveting from start to finish.

Thanks Sam for the appreciation. Yeah, I'd read in your place about your having watched the film with Assayas himself having introduced the film. And, I couldn't agree with the director more as regards watching the 5 1/2 hour version in place of the condensed version. The film, despite its formidable length, was riveting from start to finish.

HAVE to watch this now !! Can't believe I missed it.