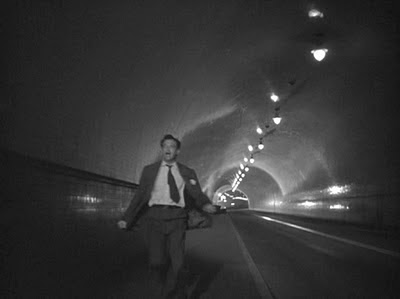 Act of Violence had more fatalism in it than most noirs could hope for, and that is reason enough for me to classify it as a truly brilliant piece of cinema. This Fred Zinnemann film is a disturbing vision of a successful man suddenly finding his quietly secluded and happy life and the world around him disintegrating (read: crashing) into pieces; yet, despite its existential bleakness, the film is also quietness personified. The story involves a World War II veteran finding his darkest secret and haunted past suddenly popping out of nowhere when a mysterious crippled man starts looking for him with manic determination. The ominous buildup of the script aside, this brilliant cat-and-mouse tale had at its forefront a slew of sterling performances – not just from the two male protagonists (Van Eflin as the man on run and Robert Ryan as the enigmatic stalker), but also from the two ladies in supporting cast (Janet Leigh as the loving, beautiful wife and Mary Astor as a world-weary hooker). The melancholic soundtrack and the expressionistic camera-work do exemplary jobs in setting up the atmosphere of this moody and, at the risk of repeating myself, deeply fatalistic work of art. It is also a great piece on such gothic themes as guilt and retribution. I’m sure it wasn’t a matter of coincidence that David Cronenberg’s masterwork A History of Violence bears such striking thematic resemblance to this criminally underrated film.

Robert Ryan was an equally overlooked actor, and it was very rare to see him playing the hero.

I found a pristine copy at a film fair yesterday after many years, and was extremely pleased.

Along with the magnificent "The Set
Up", this was Ryan at his finest.

A excellent review of a forgotten noir classic.

Hey, I'm scanning through your archive and dipping into reviews I haven't seen yet on films that interest me.

The History of Violence comparison is quite interesting, particularly since I really didn't like the Cronenberg film but thought this was great.

One reason I think is the HoV exists in some weird alternate historical reality, dividing time between a rather water-down parody of the suburbs and some kind of 20s gangster universe. (That's just a small part of what didn't work for me, and it's a technique that COULD work in other circumstances but it's relevant here.)

Act of Violence, while existing to a certain extent in Hollywood's dark never-never land of the urban noir (fascinating how, like HoV, it plays with the city-small town dichotomy, and uses geography as psychology), it roots its dread and uncertainty in the recent war. Ironically, it's this film, not the one with "History" in the title, that seems more like a history and less like an act.