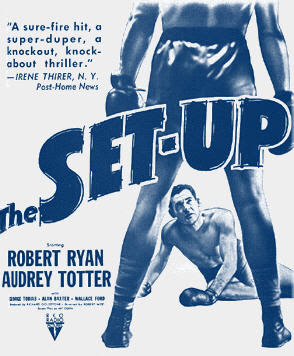 Robert Wise’s The Set-Up, apart from being an engrossing film noir – and a pretty fine one at that, it might also rank as one of the greatest boxing films ever made (maybe second only to Scorsese’s Raging Bull). It was also one of the earliest films to be shot almost entirely in real time; it begins and ends with clock timings displayed, and time elapse within matches with the film’s length. This kinetic, compact, pulsating and razor-sharp film has as its protagonist an ageing boxer who still believes he can make it big despite the numerous reversals that has left his wife mortally scared for his life. Robert Ryan, as “Stoker”, the washed-up boxer, and though liked by all, but regarded as a has-been by most of his peers, has given an exemplary performance. Though he still believes he can defeat his much younger and highly regarded opponent, his manager has secretly taken money from a mob-boss, and though Stoker comes to know of the deal much later into the fight, he decides to continue full throttle and flatten his opponent in the last round after some of the most gut-wrenching fight sequences ever filmed. The result however brings unpleasant consequences for him. The film didn’t just portray in amazing and nerve-racking details the boxing duel, it also did a fine job capturing the reactions and emotions of the blood-thirsty fans at the ring-side, as well as Stoker’s fellow boxers who range the entire gamut thinkable. And this all has been captured through great camera-work and editing.

Yep, again you peel off the gauze brilliantly here Shubhajit! This may well be the greatest boxing film ever (as you note, RAGING BULL is the only contender for that title) and it's probably Wise's greatest film directing alone (I say it that way as he co-directed WEST SIDE STORY) and a film noir gem that in that genre rates near the top as well. You've done this masterwork full justice here.

Thank you so much for this review- haven´t heard of this one before and will definitly take a look. Still nice to stumble upon new and unknown stuff.
Feel free to visit the blog I´m writing for:
http://blog.movielocker.com/
Have a nice week, all the best to you

Thanks a lot Sam. It sure poses a strong challenge for being chosen as the greatest boxing film, though Raging Bull would perhaps take the title. Did he co-direct Sounds of Music too, or else that too would be a strong contender for Wise's best solo directorial effort.

Its always a pleasure to have fellow film enthusiasts introduced to good films. I too often get to know of great films through fellow bloggers. I sure will take a look at your blog.