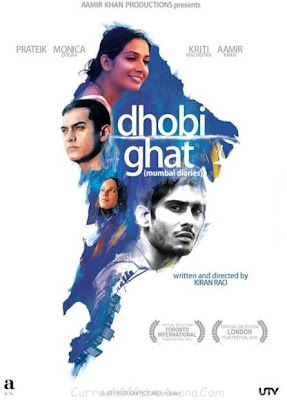 Kiran Rao had been known till now as the wife of the popular Hindi movie actor, Amir Khan; henceforth, thanks to her assured directorial debut film Dhobi Ghat, she has carved a recognition for herself, albeit among those of you who, like me, enjoy niche, intelligent, sensible and middle-of-the-line cinema. The film is about four individuals, and residents of the mega-metropolis of Mumbai, who, as coincidence would have it, end up sharing a link to each other’s lives – a chain-smoking painter who prefers living a lonely existence (Amir Khan, in a fine role completely stripped of his ‘star’ persona), a US-resident investment banker who has taken a sabbatical from her job in order to pursue her passion of photojournalism, a poor ‘dhobi’ (laundry man) who dreams of becoming an actor someday, and a young lady who has recently moved in to Mumbai with her newly wedded husband. What I found most striking about the film was, apart from the honesty of the nicely penned down script, was the way simple, unspectacular moments of a few regular people have been affectionately captured. And these moments have been wonderfully woven together to provide a collage of these disparate individuals, with the city acting as a silent but omnipresent observer. The film has been exquisitely shot, providing a tapestry that is as rich as it is affecting.

Yes, this film is quite satisfying one at various levels. I was reminded of a movie - Lost in Translation after watching this show. Do you have similar feeling ?

Great to know that it was a satisfying experience to you. I wouldn't compare with Lost in Translation, but yes, the film's lovely pacing did remind me of American Indies as well as European cinema. Thanks for the comment, Yayaver.

dhobi ghat is more than a nice film. The lack of (or hardly used) background score worked quite well, it helped propagating the idea how lonely (either deliberate of inevitable) and unnoticeable lives of the characters were. Some of the shots were beautifully taken..

The cinematography reminds me of the film 'The Wooden Camera' -a true story of Ntshavheni wa Luruli- the director himself..

Loved the film. I will watch it a second time before I try to form more nuanced views on the film. It is really top drawer stuff though.

Yes, it sure is. What I too really liked about the film was that it never tried to be dramatic or spectacular. And yeah, the cinematography is really great. I haven't 'The Wooden Camera', so can't state my opinions about that. But, comparisons aside, the film does boast of some superb shots.

That's a good idea. And given the nuanced nature of he film, it does call for nuanced views :) Anyway, I'd be interested to know your views as to how the film stands on repeat viewing.

It feels really good to find an apt review for 'dhobi ghat' at last! Well, I could view the movie again and again despite its lack of a typical storyline just because of the creativity, the intelligent direction and the 'newness' that it brings to Indian cinema. I have also recommended the movie to most of my friends who were put off by the mixed reviews that the movie fetched. What I liked most about the film is the stress on characters and how each character portrays different segments of the Indian society we live in today....

Thanks a lot Anik for the appreciation. Yes, I too was quite appalled at the kind of mixed (even negative) reviews and the reactions that the film received. As you mentioned, the film isn't about its plot but about the characters. They were portrayed very well, making the film quite an affecting urban drama. I too have vouched for the film to all my friends.

Good write up - as an after thought, I am beginning to see how the film could be viewed as a meditation on the impact of urban modernity. I loved the score but Aamir Khan has said in interviews that they will not be releasing the score which does not make sense to me. Perhaps a bootleg will show up on the net soon.

Thanks Omar. Yes, I agree about the meditative aspect of the screenplay. And yeah, though minimalist in nature, the score was good. I too am surprised to hear that it won't be officially released.

I found this to be a beautifully filmed, thought-provoking and intelligent movie. I love Indian cinema, and would love to see more of these sort of art house-type films.

I'm hoping for an encore by the film's director, Megan, as this was her debut feature - which was surprising given its matured treatment. I hope you have a great journey as regards to Indian cinema. Please feel free to get in touch if you need any suggestions on that.