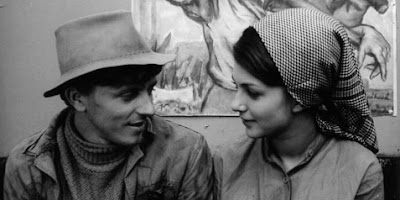 Jiri Menzel, along with Milos Forman, spearheaded the Czech New Wave, and his Closely Watched Trains is considered his greatest masterpiece. Larks on a String, however, is criminally under-viewed, and though the film managed to see daylight 21 years after it was made, we cinephiles are lucky that the then-Czech government never destroyed the prints in the first place. On the surface this is a delectable, charming, buoyant and immensely engrossing fable set in a repressive regime. However, like Closely Watched Trains or Forman’s The Firemen’s Ball, the film is filled with subversive humour and wit, and was a searing critique of the iron-hand rule of the powers that be. With the communist junta having come to power, the bourgeois are being forced to do hard industrial labour and dissidents get vanished from the society. And in such a climate as this, brews a series of tragi-comic and deeply humanistic love stories, including that between a diminutive, soft-spoken and seemingly apathetic former chef and an angel-faced, cherubic girl who’s a prisoner and working in the same plant that he is. It is filled with a host of idiosyncratic and unforgettable characters – oddball middle-aged people who were forced to leave their former professions, and a mild-natured, newly-wed police officer who is having a torrid time trying to figure out his pretty, bashful wife. The humour is never too dark nor saccharine, thus making this brilliantly acted film, in equal measures, bittersweet, ironic and yes, darkly comic; but more importantly, quietly disturbing in its bleak portrayal of a dismal socio-political environment, and absolutely mesmerizing, absorbing and fulfilling for its viewers.

Larks on a String will be released by UK's Scond Run DVD in Feb/March 2011.

"The humour is never too dark nor saccharine, thus making this brilliant acted film, in equal measures, bittersweet, ironic and yes, darkly comic, but more importantly, quietly disturbing in its bleak portrayal of a dismal socio-political environment and absolutely mesmerizing, absorbing and fulfilling for its viewers."

Well Shubhajit, you leave little for the peasants. Ha! This is indeed an underrated piece that fully has earned the March Second Run release on DVD. (one I will be investing in for sure) You've sized it up -and Menzel's work ingeneral - and it's a must for anyone examining the treasures in Eastern European cinema. CLOSELY WATCHED TRAINS is indeed the masterpiece though.

Thanks Sam. Yeah, Larks on a String is an underrated & under-viewed masterpiece, that remains a gem of an Eastern European cinema. Its great to know that you'll be investing once its dvd is released. This movie is sure worth owning and watching multiple times, along with Menzel's Closely Watched Trains.