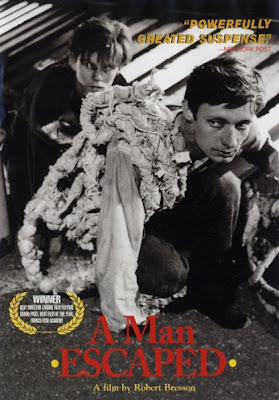 A Man Escaped is widely recognized as one of the finest escape dramas ever made, despite it being anything but an archetypal escape film. French auteur Robert Bresson, true to his love for minimalism and under-dramatization of proceedings, stripped the film to its bare essentials while chronicling the story (based on the memoirs of Andre Devigny) – the end result is a nerve-racking experience and an outstanding film. Fontaine (François Leterrier), a member of the French Resistance, is captured by the Nazis and put into a prison. Right from the moment he arrives there, there’s just one thing and one thing alone occupying his mind – finding a way to escape from the hell-hole. He makes exceptional use of his fecund mind, resourcefulness, observant nature, and searing will to accomplish his goal, and gets crucial assistance from some of his fellow inmates as well as in the form of much needed luck at times, in order to meticulously plan his escape. The first half of the film deals with the planning and preparatory process, while the second about the actual escape with a young cell-mate in tow. Stylistically the movie is anything but the kind of pulsating, edge-of-the-seat thrillers that one would generally expect, what with its stark B/W photography, long takes, matter-of-fact voiceover, and long moments of silence (only to be punctuated from time to time by Mozart’s compositions). Yet, despite the quintessential Bressonian elements, this managed to be a truly gripping account courtesy the minute detailing, clinical storytelling, brilliant narrative pacing, and the importance laid on subtleties over grandiosity.

Superlative capsule, Shubhajit, on one of the greatest films in the history of the cinema, a film that easily must be counted as the top prison drama of all-time, and a supreme masterwork of the cinema's most austere filmmaker. As usual in Bresson's films all the elements of the sound track are very important. Besides the music, there is the commentary off-spoken by Fontaine. As in DIARY OF A COUNTRY PRIEST, it is in the past, while what we see is in the present, thus in a sense destroying real time and re-fashioning it for the purposes of the film. Although the prison is cut off from the outside world, this world is continually present in the sounds that the prisoners hear: the trains that are constantly passing, the trolley with its bell, the voices of people beyond the world. In any case the final sounds of the film suggest that death is present in the world of the film, and has so from the very beginning. The use of Mozart's 'Great Mass in C minor' is utter perfection, and the stark black and white cinematography by Bresson wizard L. H. Burel is ravishing.

Thanks a lot Sam for the appreciation and for the marvelous appraisal of this Bresson masterpiece. Your comment is truly hall-of-fame stuff, and is a clear indication of how deeply you love this film - the "top prison drama of all-time" as you say and have provided a fantastic case for.

Regarding your observations about the use of sound in the film, couldn't agree more with you on that. Though the film is filled with long moments of silence, the smallest and oftentimes mundane aspects have been used to create the mood and feel. From my experience of Bresson's films, I found the usage of Mozart quite surprising, but it helped in adding layers of understated pathos to the otherwise stark portrayal of the proceedings.

Thanks again for the great summation.