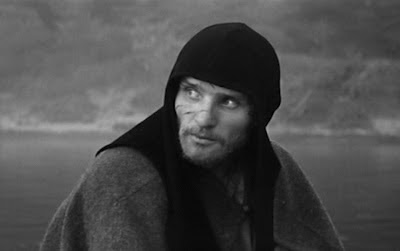 Andrei Rublev, the second feature film of Andrei Tarkovsky, is considered not only the Russian master’s greatest masterpiece, but also universally recognized a seminal film in the history of world cinema. Loosely based on the life and times of the legendary 15th century Russian icon painter, this staggering historical epic faced significant censorship issues upon its release on account of its bleak and disturbing nature, and political and religious content – consequently various versions of the film exist. Though technically a biopic, Tarkovsky imbued the film with a breathtaking scope that expanded far beyond the confines of that sub-genre. A series of loosely defined chapters is used as literary device to chronicle the journey of the medieval-era painter (stoically played by Anatoli Solonitsyn) through some of the most turbulent periods in Russian history filled with tyranny, religious oppression, famine, war, murderous rampage by Tartars, destruction of museums and churches, etc. These historical upheavals have been counterpointed against Rublev’s personal and religious crises, and his coming to terms with himself and his art. The grim content, minimalist structure, complex ideology, and austere mood were brilliantly emphasized by the stark B/W photography, leisurely pacing and an excellent (but sparsely used) score. The final chapter dealt with the making of the perfect bell for the Grand Prince, against all odds, by a young boy with burning passion and ambition named Boriska (superbly performed by Nikolai Burlyayev). Though seemingly a detour, this ravishing section formed the most unforgettable section of this majestic work. Panorama of Rublev’s artwork in resplendent colours was the parting masterstroke by the maestro.

Not just a masterpiece by a true work of art literally nd figuratively. Most would name this as Tarkovsky's greatest film. Another excellent capsule piece here!

Yeah, this would certainly make the strongest case for being named as Tarkovsky's greatest masterpiece. And couldn't agree more with your observation on this film, Sam.