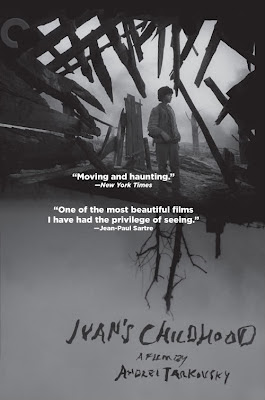 Andrei Tarkovsky made just 7 feature films in his life, and it was the marvelous war-time drama Ivan’s Childhood that begun the celebrated (albeit not-so-prolific) journey of the Russian master filmmaker while also eliciting superlative praise from Bergman. Harrowing and poetic in equal measures, this was yet another fascinating addition to the pantheon of memorable movies made at the backdrop of WWII. This is the tale of the eponymous 12-year old boy (Kolya Burlayayev) whose process of growing up has been accelerated on account of the raving war that has engulfed his home as well as his family, thus emphasizing the bitter irony of the film’s title. His burning hatred for the Nazis, coupled with his ability to remain under the radar while entering into hostile enemy territory, has made him a key resource for the Russian army in order to collect information. Tarkovsky brilliantly juxtaposed the harrowing and war-ravaged reality with lyrical, melancholic, and at times, grotesque dream sequences, in order to present a heartbreaking account of the horrors and futility of wars. Though Ivan is the principal protagonist, the point-of-view regularly jumped to two other characters as well – the seemingly brusque but essentially humane Captain Kholin (Valentin Zubkov), and a young stone-faced lieutenant harboring feelings for a pretty young medic. The stark monochrome photography, exquisite usages of shadows and silhouettes, and canted camera angles, added a dash of expressionistic touch to the film’s bleak visuals of the devastated landscape, while the alternatingly lilting and jarring score did a great job at complementing the dream-reality duality that the director played with.

What a fantastic film and I recently saw this for the first time and was blown away. Loved it! Nice work here in summarizing the key themes. It's amazing that Tarkovsky's vision was already there in this first film. I wrote that although he would become more ambitious in later films, he was probably never more visceral than in this film. I love that sequence where the soldiers are rummaging through Berlin. Also that white birch forest scene is so striking.

Yeah, some of the images and sequences in the film were incredibly beautiful and heartbreaking. The final shots of Berlin, which you've referred, were devastating, as were the earlier shots of the war-ravaged Russian countryside where Ivan takes refuge for a short while before Kholin comes and takes him back to the army camp. And yes, the white birch forest scene where Kholin tries to seduce Masha was striking too - which reached a peak where he holds her with his legs on either side of a dugout and her's dangling in the air.

Thanks a lot Jon for sharing your appreciation of this film.

This is absolutely my favorite of all of Tarkovsky's films. It's clearly influenced by Bergman's work, and it shows.

Do you say that because of the surreal dream sequences that have been juxtaposed against the bleak and stark reality? Interestingly Bergman himself was effusive in his praise for this film.

A visually ravishing film across the board, and perhaps the most poetic in the career of one of the greatest directors of all-time. I have also read of the Bergman adoration!

Yeah, the film's poetic and lyrical depiction of an otherwise harrowing time in human history, made this a fantastic watch. In fact, I feel this makes for an excellent companion piece to Tarkovsky's next film, Andrei Rublev - so great that I watched them one after the other.