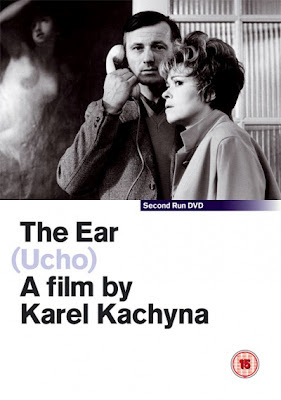 Breakdown of a marriage, and political satire on an Orwellian state, require separate films in order for justice to be done to each. It was the genius of Czech filmmaker Karel Kachyna that the two seemingly disparate subjects could so seamlessly be combined into a single crisply-timed movie, that too with such pared down aesthetics. The political commentary was in fact so charged and scathing that it was promptly banned, and stayed so for 22 years! The collapse of the marriage of the bickering couple - Ludvik (Radoslav Brzobohaty), a senior Party official, and his bitter, alcoholic wife Anna (Jirina Bohodalova) – has been examined in scorching and heartbreaking details. The two are still in love though, and their suppressed mutual love has been brilliantly exposed through the external political climate. Ludvik has an ominous feeling that they are under constant surveillance, and the ominous presence of Big Brother is, ironically, what brings the two together during moments of cold fear. The narrative alternates between then the present – a seemingly unending night where all the vitriol for one another and their repressed guilt and frustrations come to the fore, thus making them hang delicately in their mutual distrust and the palpable fear of the secret police who might pounce onto them any second, and an immediate past dealing with an important political party they attend earlier in the evening. Minimalist in style, the film succeeded in creating nail-biting tension from start to finish thanks in no small parts to the excellent pacing, the moody photograpgy, the constant sense of marital imposion vis-à-vis political explosion, and superb performances by the two leads.

There is razor-sharp immediacy in this clinical film that yet again shows the cinematic and groundbreaking brilliance of the Czech New Wave. You have imparted your own superlative insights in establishing it's 'essential' status for all serious cinephiles. I own this very same Region 2 Second Run DVD of the film.

Thanks Sam. I really am highly fond of a number of Czech New Wave films, and this deservedly takes place in that list. Great to know that this very copy too is a part of your vaunted dvd collection.