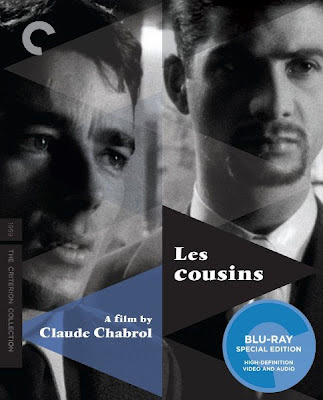 Les Cousins, the sophomore feature of acclaimed French filmmaker Claude Chabrol, one of the founding fathers of the Nouvelle Vague movement, was a bleak morality tale on lost innocence, moral decadence and the corrupting powers of city life. In his debut film La Beau Serge, the protagonist returns from the city to his village to reconnect with his past. In a sly reversal of that scenario, Charles (Gerard Blain), a naïve and introverted young man takes the trip from the country to Paris in order to pursue studies, and takes up residence with his brash and outgoing cousin Paul (Jean-Claude Brialy). The two cousins couldn’t be more different from each other – while the former is studious, has a softer personality and spends sometime everyday writing to his mother, the latter is a womanizer and party animal who prefers to rely on his intelligence and resourcefulness rather than hard work in order to pass his exams. And things get exceedingly complicated when Francoise (Stephane Audran), a beautiful and promiscuous young woman who Charles has fallen for, ditches him for his debonair and gregarious cousin without so much as an afterthought. The moody photography and carefully used score made this brilliant psychological drama a bleak examination of the unfairness of life. One of the most memorable moments in it is a lavish orgy with Wagner playing on the background. Chabrol also made terrific use of ‘Chekhov’s Gun’ for the deeply disturbing and darkly ironic finale.

It's a dark work, and indeed a brilliant psychological study and an early triumph for Chabrol. I do well remember the use of Wagner there, the subtle score and the moody cinematography. You frame the film's artistic value here perfectly in this excellent capsule!

Thanks a lot Sam. The city-village dichotomy is usually used by most filmmakers for comic and/or satirical effects. Chabrol, however, turned in into a dark & disturbing critique - what a brilliant movie indeed this was!