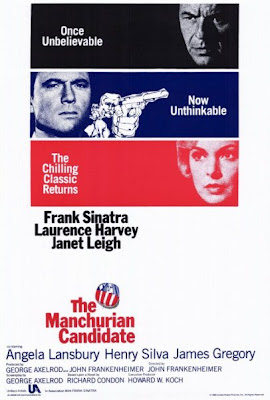 The Manchurian Candidate was made when the Cold War was at its peak; consequently, its theme, tone and subject matter was commensurate with the kind of fear and paranoia that defined that particular era in the 20th century, and continues to be prescient in today’s context too. Speaking about the plot for this nerve-racking political and conspiracy thriller would be giving away the surprise elements of the film, so I’ll keep it as succinct as possible. A group of soldiers engaged in Korea are ambushed while on patrol. A few months later they return to hero’s welcome, with Sgt. Raymond Shaw (Laurence Harvey), the son of an icy, domineering and over-ambitious lady (Angela Lansbury) who he passionately hates, being given the Congressional Medal of Honor. Simultaneously, Capt. Bennett Marco (Frank Sinatra), who had personally recommended Shaw’s name, starts getting bizarre dreams involving all those who were there under his command, and despite considering Shaw as the “kindest, bravest, warmest, most wonderful human being I've ever known in my life”, he becomes convinced everything is not as it appears to be – least of all, Shaw himself. The film dealt with such topics as brainwashing and thought control to supplement the tale of international political conspiracy, and the end result of the brilliantly enacted (and at times, far-fetched) movie was both incredibly tense and highly disturbing. The recurrent dreams that start plaguing Marco would rank among the most disorienting and disconcerting sequences ever filmed, as would the dangerous relationship shared between Shaw and his mother. The strange and ominous first meeting between Marco and the seemingly mysterious Rosie (Janet Leigh), however, ought to have been expanded upon.

Great review, I haven't seen the film in ages but will have to give it another watch after reading this post

Thanks. Yes, it sure is worth a revisit.

a great movie indeed - the sequence with the soldiers and the gardenia club or whatever it was - still packs a surreal punch, but depictions of the bad guys heavy-handed and corny now with their bad skin and disheveled sweatiness.

The dream sequences were among the most brilliantly done sequence I have ever seen. Yes, depiction of the "bad guys", so to speak, was a bit heavy-handed, but it was kept at a bare minimum and hence wasn't too big a concern for me. As for the political conspiracy angle, at least the brainwashing and thought-control part seems entirely relevant today - in fact even more so than it was then.