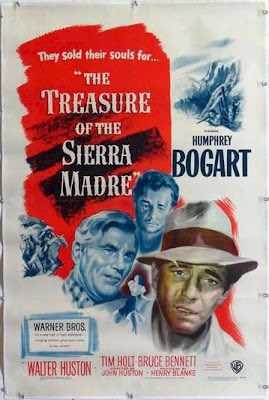 One might argue as to which was the greatest achievement of John Huston (my choice would be a toss-up between The Maltese Falcon and The Asphalt Jungle), or for that matter Humphrey Bogart’s finest moment under the sun (I’d go with In A Lonely Place) – but there’s no denying the place of The Treasure of Sierra Madre in the pantheon of the finest American movies ever made. This classic adventure tale remains as a corrosive treatise on the pliable and destructive nature of human beings when under the influence of money, greed and rabid suspicion. When two jobless, penniless drifters, Dobbs (Bogart) and Curtin (Tim Holt), eking out a day-to-day basis survival at the Mexican town of Tampico, get acquainted to a loquacious and aged prospector Howard (Walter Huston), they lap up the opportunity to embark on a perilous gold hunt, as they have nothing to lose. However, despite the wisdom of the wizened old man, the camaraderie that they show to fight bandits, fatigue and frustrations, and their decent natures, as soon as they strike gold, trouble starts brewing between them, and inevitably, things start going awry at a real fast pace. Bogart provided an absolutely explosive performance in the against-the-type role of an edgy, volatile and an increasingly paranoid man who self-destructs at the first given opportunity, and he received an excellent supporting turn from the director’s father as a wise old man who knows full well what money can do to a man. The incorruptible, goody-two-shoes characterization of Curtin was perhaps the sole blip in this otherwise exciting and immensely engaging B. Tavern adaptation.

One of my personal favorite films...probably since I was like 5 years old. I know this film inside and out. I love everything about it and the acting is of course first rate. I do love the 3 leads and of course who could forget Alfonso Bedoya as Gold Hat! The other thing that is so tremendous is Max Steiner's score...one of my all time favorite film scores. I can hum it in my head right now.

Yeah, a superb film indeed - and a great depiction of the age-old maxim on the corruptible influence of wealth & greed. Bogart was especially stupendous, though I wasn't that impressed by Curtin's character - I would have preferred it more had some shades been added to the otherwise seemingly incorruptible character. And yes, the score too was nice. Thanks a lot Jon for sharing your love for this American classic.

One of the greatest of all American films, and in a splendid bit of timing here, poised to make a run for the best movie of 1948 in this coming Sunday's voting at WitD. It's a very tough year though with De Sica's BICYCLE THIEVES and Olivier's HAMLET among the contenders. In any case, Bogart Holt and the great character actor Walter Huston are stupendous in the brilliant and haunting study of greed, standing among the iconic John Huston's greatest works.

Again you have peeled away the gauze magnificently, Shubhajit!

That's a great point you've made Sam. This Huston classic would indeed be a very strong candidate in the 1948 poll at WitD, and I sure am looking forward to it. The film's themes, despite being nothing new, managed to get lives of their own thanks to Huston's brilliant filmmaking, pacing, script and stellar acting. Thanks a lot Sam for sharing your observations.