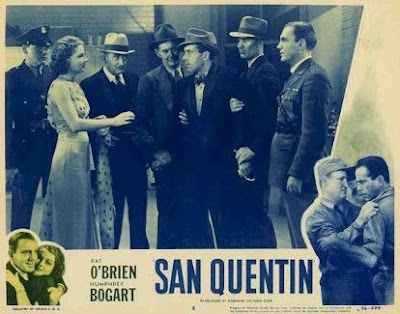 It would not be wrong to qualify the movie San Quentin as a quickie – at 70 minutes, the movie length is on the shorter side. This might not rank among the greatest films ever made, but it sure was a feather in the cap for Warner Bros., one of the pioneers of the gangster film. The story is quite “filmic” by today’s standards – a delinquent imprisoned young man finds out that the jailer is having a relationship with his sister; T\this enrages him so much that he starts hatching a plot with a more hardened criminal, who was planning to escape all along, in order to murder that tough but decent guy. Though not greatly remarkable, the fact that the movie moves at a brisk pace, with some action or the other always round the corner, makes for an engaging watch. Pat O’Boone is good as the military-man, new at this facility at San Quentin, who tries infusing more discipline into the prison, and so is Ann Sheridan as the night-club singer the Captain has fallen for. But rest assured that the movie belongs totally to the then-unknown Humphrey Bogart, whose character is filled with rage and frustration in almost every frame of the film. What turns out to be the claim to fame for the film however is a smart, tension-filled escape scene, followed by a spectacular and unpredictable chase sequence.

It's not one of my favorites, neither from this set, nor in the pantheon of Bogart cinema, but it's fair enough Shubhajit, and I agree the escape scene is a major highlight. Nice work here again!

as you mentioned, it nowhere ranks among the best of Bogart's pantheon, which contains such masterpieces like In A Lonely Place, Casablanca & Maltese Falcon. Nonetheless, it's a decent film when on its own with, well, a great chase sequence. Thanks a lot Sam for sharing your point of view.