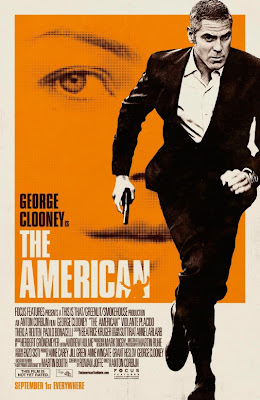 Plot-wise, as many critics have complained, The American might seem woefully short. There aren’t many twists in the tale, and the ones that are present, are easy to guess if you’ve watched a few movies. Yet, what makes this film interesting is that it is a departure from the fast, action-a-minute thrillers that we’ve become so accustomed to. Moody, evocative and absorbing are few of the adjectives that can be associated with the European-style movie despite it being a thriller. When a job for middle-aged contract killer goes awry, forcing him to execute his fiancé, he’s forced to retreat to the tiny Italian town. He’s determined not to be noticed, but he ends up striking friendship with a priest, and slowly but surely also finds himself falling for the beautiful hooker that he frequents out of necessity. And when these make him want to quit the business of cloak-and-dagger, things don’t turn out as planned. George Clooney is excellent as the laconic, loner, naturally paranoid and highly competent American hit-man, while Violante Placido gives the film its human element as the lovely local prostitute wanting to get out of her decrepit life. The movie is beautifully paced, exquisitely shot, and quite enriching, and though nothing much is displayed for large parts of the time, they play vital roles in showing the protagonist’s sense of ennui, loneliness, self-imposed discipline and a strong current of distrust and paranoia.

It is good that you have given it some more stars than it is rated with others.

I Also liked this movie, even if it is a tad slow for my likening. As a die hard clooney fan, i felt the cimatic scenes were much better.

Thanks King Viswa for posting your views. Yeah, I did give the movie more stars than most critics have obliged it with. I agree it is a good cinematic experience, and its slow pace worked in the movie's favour - accentuating the moody ambiance.

"The movie is beautifully paced, exquisitely shot, and quite enriching, and though nothing much is displayed for large parts of the time, they play vital roles in showing the protagonist’s sense of ennui, loneliness, self-imposed discipline and a strong current of distrust and paranoia."

Well Shubjahit, I will confess that I am no fan of this film, and how grown wearisome of Clooney, I can appreciate the excellent qualifying evaluation above, and know the film has it's supporters in the critical ranks.

Hope all is well, and you are enjoying your break my friend.

While I've got a lot of Oscar-bait yet to see, this is still in my top five for 2010 as of now, for exactly the reasons you cite. Clooney has the innate charisma to justify patience with his story; I'm not sure if any other American star of his standing could pull the role off.

Well, the movie quite certainly has its fair share of detractors, and since you say you aren't a fan of this film, we surely lie on contrasting sides of the fence with respect to this one. But I do state again, that despite the slow pacing and the somewhat familiar story, I did like this film. And great that you agreed to my summation of it.

Well, I'm having a super-relaxed time at the break. Over a week of it has flown by, and just 2 more remains. So I have to up my relaxation ante by that much more :)

Thanks a lot Sam for stopping by and for your appreciative words.

Thanks Samuel for sharing your opinion about this film, and glad to know that you're a fellow admirer of this film. I completely agree, Clooney innate charm mean that very few people in Hollywood, despite some very good actors at disposal, would have managed to pull of that part with such nonchalant ease and style.

The poster I think is both the film's strength and weakness.
Due to the slow pacing you mention, it doesn't really fit the mood, but there's no denying the poster made me interested in the first place. I'm undecided if I want to see this.

Well, I think you should go ahead and see it. I'm pretty certain that even if you don't love it, at least you'll like it. If not anything, the film is especially soothing to the senses, particularly the eyes. So yeah, do take the plunge :)