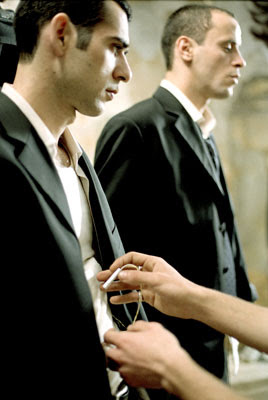 ’s brazen display of might is the only practical modus operandi for survival in the intensely hostile environment around them. However, that said, newspapers rarely provide us the other side of the story, especially why the Palestinian (or Islamic) suicide bombers do what they do. Hany Abu-Assad’s Paradise Now tries doing that, and the end result is a movie filled as much with seething anger as it is with empathy. The movie begins with the lives of two Palestinian youths, the laconic and perpetually sulking Said, and his temperamental but more jovial buddy Khaled, working as car mechanics, and living impoverished but dignified existences in a region filled with hatred and violence. Soon enough, though, we are shocked to find that these two otherwise ‘normal’ and regular guys are planning to avenge the so-called wrongs done to them by volunteering to act as human bombs in Tel Aviv for an underground terrorist group. The subject thus is potent and real, and has largely been presented without the aid of jingoisms. Khaled’s final transition from fundamentalism to rationale is too quick to be really believable; but the director more than made up for that by serving us a haunting climax that packs quite a punch – its effect might not be bulldozer stuff, but quietly provides a more than palpable impact in its reconfirmation of the vicious cycle of violence.

This is often a breathlessly-paced film that is drenched in paranoia, that manifests itself in murderous eye-contact (the 'seething anger' you speak about in your stupendous extended capsule review here),
and within the Palistinian ranks there's a pervasive suspicion of betrayal at every turn. And yes, no jingoisms whatsover here. Made in 2005, this film of course is as topical as any today, and will be for quite some time into the future.

Thanks Sam for the good words & sharing your views on this movie. Yes, the subject is as topical & relevant in today's contexts as can be. The core might be on the Israel-Palestine conflict, but can be extended to nearly major country - US-Iran/Afghanistan, India-Pakistan/Maoist rebels, West-Islamic world, Russia-Chechnya, so on and so forth. A picture of the violent times we're living in.