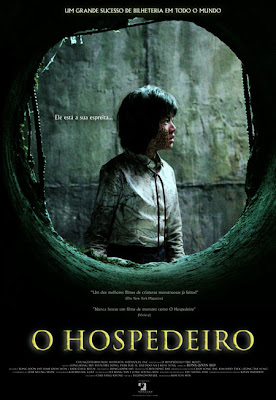 The Host, directed by the acclaimed South Korean director of Memories of a Murder fame, is summer blockbuster like few of its kind. On one hand it is a pretty darn satisfying popcorn churner with some rip-roaring thrill quotient, while on the other it is a darkly comic character study and a potent socio-political commentary. The movie starts off with a blatant abuse of the environment when an American scientist orders his Korean assistant to clear bottles after bottles of formaldehyde into the basin, and that ends up producing an uncouth blood-thirsty creature that one not-so-fine day jumps out of River Han and creates mayhem in . The movie kicks into full-throttle when the young daughter of our dim-witted but courageous protagonist (Song Kang-ho), belong to a dysfunctional but courageous family, takes a vow to get even with the ugly monster and rescue her daughter who has been trapped in a dank sewer of the labyrinthine drainage systems by the river. The movie boasts of some fine SFX and scintillating action sequences; but the maverick director managed to make this a genre-bending film by having oddball characters with their share of idiosyncrasies taking the place of regular heroes expected in creature films, and infusing his quintessential dose of black humour which will even make you cringe at times. And the underlying statement on our rapidly deteriorating environment through human callousness, too, shall not be lost on the viewers.

I love this movie- Bong Joon-ho is so adept at fusing genres to produce something unexpected. Have you seen his newest film Mother? It's probably my favorite of his that I've seen so far.

This is such an unusual movie, at times really creepy, at others kind of poetically beautiful, at others hilarious; even its comedy is wildly varied, leaping from broad slapstick to biting satire. I love the goofy, painfully obvious special effects; the monster's obvious status as a CGI construction somehow makes its ungainly movements, its refusal to fit seamlessly into this otherwise fairly realistic world, more poignant.

Unfortunately I haven't seen his latest film Mother yet, though hope to see it soon, given that I've already developed quite a liking for Bong Joon-ho's films.

Thanks a lot Ed for posting your views.

Yeah, couldn't agree with you more. We've rarely seen creature film and black comedy going side by side together. And just not that, this one also has, as you noted, biting satire, goofiness, and even moments of quiet and poignance. Quite an unusual movie this certainly is, especially given the one-dimensional company it has in this genre.

I'm so glad I saw this movie in the theater not knowing anything about it beforehand. It totally swept me off my feet for the reasons that you and Ed describe. Why I haven't seen it again I can't say, but I do want to see Bong Joon-ho's new film, Mother, as well. Just doesn't sound like it's as much of a rollicking good time as The Host.

Thanks Daniel for sharing you enthusiasm for this movie. The Host, it seems, has garnered a lot of positive vibes among discerning movie goers, and that says a lot about Bong Joon-ho's ability to take a cliched genre and make something really interesting out of it.