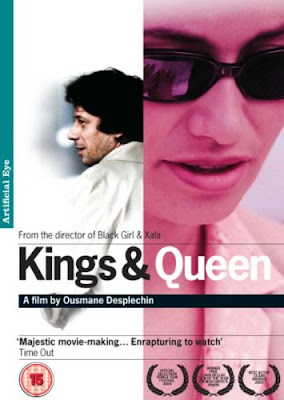 French filmmaker Arnaud Desplechin’s Kings and Queen, like his next film A Christmas Tale, is easy to appreciate but difficult to fall in love with. Not just that; like the latter, it is a stylistically brave and tonally irreverent, whimsical and pointed take on otherwise serious matters as dysfunctional family, unrequited love, unhappiness and illness. The basic premise concerns a single mom who finds herself at the crossroads of her seemingly well-laid life when her father is diagnosed with cancer; meanwhile her ex-husband, who she wants to fall back on, is having problems as he has been forcefully admitted into a mental asylum. Desplechin tries to cover so many areas and angles, both in terms of plot and structure, that the viewers might find it difficult to find their concentration and involvement going, resulting in an eclectic but an extremely unpredictable work – which takes me right back to my first point. The ensuring hotchpotch, if I’m allowed to say so, is saved largely because of the fine performances of the film’s two principal leads – the somber Emmanuelle Devos and the inimitable Mathieu Amalric. Desplechin might have had a swell time making this film, but watching it might not be as much fun for most.

Shubhajit: As it is I am a huge fan of this film, and consider it Despletchan's masterpiece, and one of the greatest films of the past decade, where it placed #6 on my list. There is a depth here, not present in A CHRISTMAS TALE, and the film owes mightily to the cinema of Ingmar Bergman for its surrealist elements, and the imparting of philosophical asides from the dead. It's a film with lasting resonance and the well-deserved recipient of spectacular reviews from film critics and bloggers alike. As always you have crafted a capsule of critical vigour.

Thanks Sam. Yeah, I'm aware that Kings & Queen happens to be one of the best movies of the past decade in your opinion, and I certainly respect your mightily qualified views & opinions on cinema. Unfortunately, though I did like it, it didn't strike as much a chord with me as it did with you.