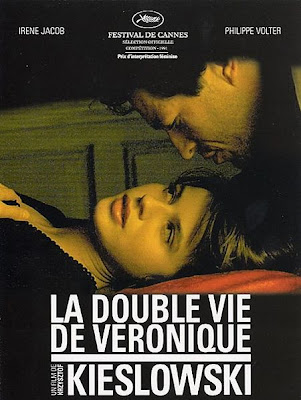 Celebrated Polish filmmaker Krzysztof Kieslowski’s The Double Life of Veronique is a movie that works at a philosophical, and even, metaphysical level. It tells the tale of duality and spiritual connection between two unrelated individuals – Veronika, a talented Polish girl who unfortunately looses her life while making her debut as a vocalist for a symphony on stage, and Veronique, a French girl who too was a singer but is now working as a music teacher, and who gets mysteriously affected by her Polish counterpart’s death. A sense of deep melancholy and sadness pervades the film, as the director goes about making us feel the kind of cosmic harmony that existed between the two girls prior to Veronika’s untimely death. Nearly every frame of the movie has been created with such exquisite care and is filled with such rapturous beauty, matched only by the delicate and classical beauty of the lead actress, that one is sure to be left mesmerized. Irene Jacob (who would go on to star in the director's Three Colors: Red) played both the roles to near perfection, filling them with fragility and pathos. The film also boasts of a hauntingly evocative score. The film does at times veer towards self-indulgence; further, the abstract and meandering plot, the unabashed poeticism, and the challenging style adopted by Kieslowski, might be off-putting for those uninitiated to arthouse cinema; nonetheless, even when one doesn't comprehend the proceedings, the movie doesn't fail to strike a chord with somewhere deep within.

"Nearly every frame of the movie has been created with such exquisite care and is filled with such rapturous beauty, matched only by the delicate and classical beauty of the lead actress, that one is sure to be left mesmerized."

Indeed Shubhajit, and certainly I continue to be mesmerized and ravished by the staggering masterpiece of the cinema, which is one of it's iconic director's greatest works. As always you frame this film's hypnotizing power, which is magnificently negotiated by the light and shadow-dominated cinematography of Sladomir Idziak, and the sublime score by Kieslowski alumni Zbigniew Preisner.
There is really so much you can pose as to Kieslowski's prevelent intentions here, but it's clear there's a lot on the plate, including determinism, which poses that events are reliant on what happened before, the nature of the human spirit, religion and free will, and even a political statement in which the one Veronique will sacrifice here life for the other, beckoning back to Poland's own sacrifices during World War II. But apart from all the issues that can be successfully defended, the film is unquestionably a story of interconnected souls, and love and loss, played out with mystery in what often is metaphorically negotiated in another dimension.

Thanks a ton Sam for that stupendous comments - perhaps one of your finest that I have had the pleasure of reading at this humble blog of mine.

This is one movie that is more for the senses than for the intellect. That's of course not to say it doesn't have enough food for thought; it covers a lot of philosophical & metaphysical areas as wonderfully elucidated & explained by you. I hadn't really gathered the political undertones as you mentioned. Now that you say, that's indeed something to chew on.

But, even if one fails to unravel all the contents of the film, but mustn't really try too hard, rather let the movie to work its way into one's senses. The lush photography, the haunting atmosphere, the evocative score, the leisurely pacing, the hints at surrealism, and of course the serene performance & fragile, ravishing beauty of Irene Jacob, they all contribute to make this such a majestic work.

It's been a long time since I attempted a Kieslowski film, but this is definitely one of my favorites. Although it only became such when it was explained to me thoroughly by academic essays. Kieslowski's nuance with mood and atmosphere is staggering. There's no one like him. Except maybe Tarkovsky.

I'd love to hear/read what the academic essays mentioned about the film, cos at the end of the day, I'm an amateur film enthusiast and so wouldn't mind expanding my awareness and/or understanding of the medium.