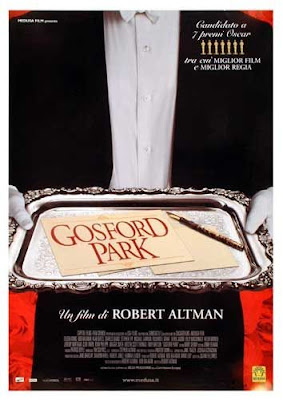 In , Robert Altman has fused the popular whodunits of Agatha Christie with the social mannerisms and satires of P.G. Wodehouse, making the end effect a charming who-is-the-killer tale and a pointed look into the 30’s class structure in . An ensemble film if there ever was one, Altman managed to keep the numerous characters and the freely wavering narrative just about in control as he presents a couple of days into the lives of a group of English aristocrats, on vacation at a huge manor, with their array of servants, maids, butlers and what not. And amidst their weekend of hunting, gossiping and fine dining, the host ends up dead in his library; and if that wasn’t enough, he is discovered to have been killed twice! The whodunit structure, though, acts largely as a prop for the narrative as Altman uses most of his energy at caricaturing and satirizing those residing upstairs, the ones living downstairs, and the numerous staircases that form symbolic conduits between the two disparate groups. On surface the more aristocratic counterparts are happy with their cocktails, bridge games, expensive couture and their trademark stiff upper lips; but scratch a bit and you find that jealousy, adultery, narcissism, opportunism and bloated egos abound in plenty. Too many cooks oftentimes spoil the broth as it is difficult to paint so many characters in a limited time frame. Thankfully the actors did a good job in keeping one interested.

This film, of course was patterned after the celebrated BBC series UPSTAIRS DOWNSTAIRS, and it basically has the same narrative/class structure allure. I agree with you that it ran the risk of overpopulating the story, but as you subsequently note teh actors were superlative. My personal favorite was helen Mirren. This has persevered as one of Altman's most popular and critically-praised films, and I'm on board. You frame this beautifully in this commanding capsule.

Gosford Park still has its sour patches, but achieves with an incredible screenplay, inspired direction once again from the great Robert Altman, and a huge ensemble that does not disappoint.

I pretty much agree on all counts - I don't quite see it as the "one of the best of the decade" type masterpieces that same label it, but it is definitely a witty, entertaining film. Not Altman's best, but it does show that he was still making above average movies late into life.

Thanks Sam for letting me know about that BBC series you mentioned, will look out for it. Yeah, the performances are good throughout. Thanks a lot for the good words.

Well, in some ways, yes. It isn't a perfect movie for me too, though a lot of critics have gone ga ga over it. Thanks for stopping by.

Absolutely, Dave. An interesting movie, and a reasonably good one too. But not necessarily one of the best of the decade. I'm quite short on viewing Altman's films, need to correct that sooner rather than later.