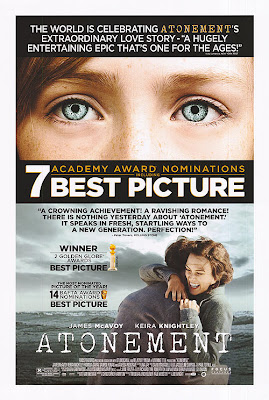 Adapted from the best-selling novel of the same name by Ian McEwan, Atonement will pull you in for being a tale of romance of the non-weepy kinds and with adult sensibilities in mind, and then push you out just a bit because of it’s attempt at being impressive without being memorable. The joyous gathering of friends and family to a wealthy English family with stiff upper lips turns haywire when a naïve and vengeful young girl accuses the guy (James McAvoy) her elder sister (Keira Knightley) is falling for of a crime he never committed; and with the World War II brewing in the backdrop, the lives of all involved get irreversibly altered one way or the other. In terms of technical achievement the movie is a thumping success. Audacious narrative styles coupled with fine camera work and a background score that is as ingenuous as it is unique, add to the wow factor of the movie. And this technical virtuosity reached jaw-dropping proportions in the scene brilliantly captured through an incredible long take. However that said, the adroitness shown in the movie’s construction and packaging does at times come in the way of capturing the story’s emotional depth, thus leaving me a bit cold at times – perhaps a more old-fashioned storytelling might have helped there.

Ah, Shubhajit, this is my favorite film of 2008, hence it headed up my ten-best list for that year, and is subsequently among my favorite films of the 2000's. You rightly note the "jaw-dropping" reaction to that spectacular stedicam sequence on the beaches of Dunkirk, underscored by the most gorgeous strains of Dario Marianelli's magnificent Oscar winning score, but there's so much more to this emotionally shattering film, including that master-class of acting on display at the conclusion, where Vaness redgrave struts her stuff magisterially. But both James McAvoy and Saorise Ronan are superlative, and Seamus Mcgarvey's cinematography and Paul Tothill's editing combine to evoke a time and place long since relegated to bitterweet memories. It's a film that leaves you emotionally shaken and not changed, and I dare say Joe Wright has fully honored and visually enriched the justly revered Pultizer Prize winning novel. The typewriter underpinning is buffo too.

Even I love the film, although I'm not sure how it's going to age. Wright's direction stood out though.

Well, well, that's a superlative appraisal of the movie. The opinion on Atonement is divided at best. As you agreed & reiterated, the movie is a masterclass where stuff like camera work, editing, etc. are concerned. And that score certainly deserved the Oscars. But I'm not as convinced where acting goes. Its good, but never attains the next level so to speak. While the movie succeeded in bringing forth the then prevalent class distinctions, as well as the kind of paranoia, camaraderie & loss that typified that era, the core story left me wanting for more emotional depth. But then I full well understand its a classic case of apples & oranges for us :)

Yeah, me too. I have my doubts as to how long it'll manage to continue to occupy my memory.

I had to look through my archives to refresh my memory. We have the same complaints about ATONEMENT only I'm not so kind to forgive:) It's a paint-by-the-numbers melodrama that tries too hard to be "important" by depicting the gruesome realities of war. And where is the atonement? A confession a lifetime later is not a reperation; she uses fiction for her salvation...not theirs. I thought the ending would have been more profound if the story was a confession, her novel a suicide note, written a few years after the events.

I did like the cinematography but especially the score, as the clacking of the typwriter in key scenes makes sense in the final act: she's rewriting the past.

C'mon Alex, that's a bit too harsh, cut the poor little movie some slack... let the lady atone in peace ;)

Alex, as I love the character you have chosen for your pen name and the movie he appears in, I will bite my tongue, especially as it is still Easter Sunday here in the states.

But if we ever meet face to face, I will challenge you to a duel to the death.

And I'd love to be a witness to that historic duel ;P

Like Sam, Atonement was one of my favorite (suprisngly) movies for 2008. The stedicam sequence is fantastic as is the acting. My wife kind of dragged me to see this and I was glad she did.

Thanks John for stopping by and sharing your enthusiasm for the movie. I have a feeling Sam and you are in the majority on this one. I didn't dislike the movie per se, just left a tad underwhelmed.