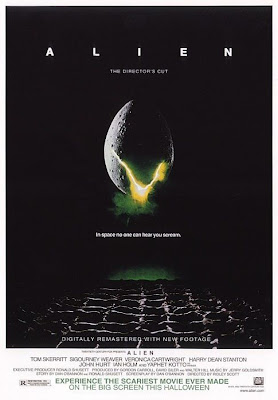 With Alien, the then largely unknown Ridley Scott took the slasher genre of science-fiction horror to the level of high art and mainstream acceptance, as it went on to become a groundbreaking genre classic with philosophical overtones, spawning numerous imitators but few equals. Aboard Nostromo, a humongous spaceship, the motley crew stumbles upon a near-indestructible and vicious alien life form at a distant planet – a creature that has acid for blood and feeds on humans with chilling efficiency. Set mostly inside the pristine white spaceship, paranoia and terror is created as much by the serpentine saliva-dripping alien, as by the claustrophobic, byzantine interiors, pacing that is at odds with genre norms, visceral thrills, relentlessly bleak cinematography and long moments of screeching silence; the film’s tagline, “In space, no one can hear you scream”, perfectly encapsulated its dark and sombre tone. The movie catapulted Sigourney Weaver, in the iconic role of the beautiful yet tough Ellen Ripley – a role she would reprise three more times, and which also formed the archetype for Linda Hamilton in the Terminator series, to superstardom. And the horrific and suggestive scene where the baby alien violently bursts out of John Hurt’s chest is part of cinematic folklore alongside the likes of the shower scene in Psycho.

Hi, Shubhajit. Nice entries for the Alien films. Aside from the intriguing ideological dimensions, Alien is also a finely crafted piece of cinema and arguably a great science fiction film. As for the follow up, Weaver's performance certainly seems more challenging and ambitious. I guess you are heading to Alien 3 next? The most under rated of all the Alien films. Verdict's out on the final film directed by Jeunet.

Thanks Omar. Alien indeed is, as you say, a terrific science fiction film more than anything else. Everything else worked for it because at its core it is a great addition to this genre. And yeah, you've guessed right, the next piece for my blog is the review of Alien 3. So do look out for it.

I'm a huge fan of the Alien series. Thus, I have to grateful for Ridley Scott getting the whole thing started with Alien. What I love about the film is how it strips sci-fi of its perfect white space suits and gleaming silver floors and makes this aging ship dark and decrepit. Space suits are brown and dirty, and the whole thing feels like a factory that's been operating for a hundred years. It gives the whole setting an originality that you can associate with and I think makes the film that more terrifying. That and H.R. Giger's frightening phallic creature designs.

Thanks Dan for sharing your love for the movie. Alien certainly remains, without any doubts whatsoever, a stupendous cinematic achievement. I've watched the first 3 installment in the series (though I've also watched Alien vs Predator, but I'm not counting that one here), and for me for the Ridley Scott version remains by far the best of the lot.

I actually enjoy Aliens perhaps a little more than Alien but they are both very different movies in so many respects. I also think Alien 3 is very underrated and is actually aided by the new cut that was released as few years ago.