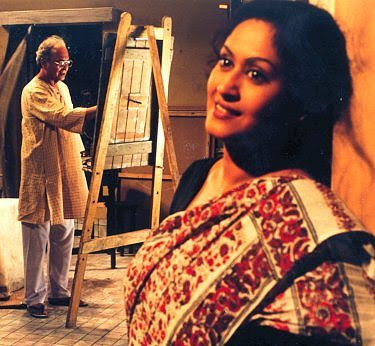 The word that would perhaps closely describe Sanjhbatir Rupkathara, promising Bengali filmmaker Anjan Das' debut film, is melancholy – not just the kind brought about by loss, loneliness and regret, but also the kind ushered in by the very act of growing up. Sanjhbati (played very well by the talented and luscious Indrani Haldar), named so because she was born at the stroke of twilight, is a girl filled with idealism and love. Her father, Saikat (brought to screen with majestic force and nuance by the veteran thespian Soumitra Chatterjee), is a painter who fills his canvas with the sights and sounds of the nature around him, and who is the person closest to Sanjhbati. But events occur in her life which slowly start replacing Sanjhbati’s idealism with disillusionment and distrust; and when one not-so-fine day she feels her father too has betrayed her trust, her beautiful little world comes crashing down with debilitating consequences for all around her. This movie, adapted from the book by the renowned poet Joy Goswami, has made commendable use of the interplay of light and shadows, as well as, reality and surreality, thus making it both a sensitive and a sensuous film. Fine photography, too, hasn’t done it any harm. The movie does have its flaws – the narrative could have been tighter for one. But on the whole, this is a pretty fine movie for a lazy Sunday afternoon.

"This movie, adapted from the book by the renowned poet Joy Goswami, has made commendable use of the interplay of light and shadows, as well as, reality and surreality, thus making it both a sensitive and a sensuous film."

Sold! Minor flaws aside, this film does appeal to me and this passage makes it one to seek out. This Bengali filmmaker is obviously an important figure, and again you've penned a succinct capsule.

Well, never knew I was such a good salesman :)

Jokes aside, yeah, this does deserve a watch. As for the filmmaker, he isn't that important yet. But yes, his name is spreading among cinephiles. Thanks a lot for stopping by.

This movie is really one of its own kind in the history of Bengali cinema. There are lot of things in this movie that I could not understand. But the artistic mood by which the movie has been narrated has touched me totally. You have to feel the movie. It is beyond the logic. However there may be some logic of the feelings which I can not explain. The use of the music and camera are just extraordinary. In a nutshell you need to have an imaginative mind to feel this movie.

Well, every good film is unique in its own way, but I wouldn't go so far as to say its one of its kind in the history of Bengali cinema as I don't put it on so high a pedestal. But, that said, I certainly understand your summarization that one needs to "feel" this cinema as opposed to dissecting it with cold logic, as I too had found it an strangely affecting piece of work. Thanks Sourya for stopping by.