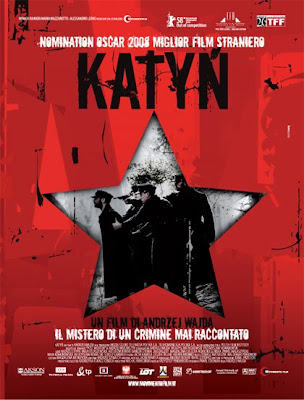 With Katyn, octogenarian Polish master Andrzej Wajda, maker of such legendary movies as Ashes and Diamonds, Man of Marble and Man of Iron, has made a film on a subject that is not just extremely personal to his life, but also which he had to wait a lifetime to bring to light. During the summer of 1940, the Soviet secret police ruthlessly executed, at point blank range, over 15000 Polish army officers (one of whom was the director’s father), and then didn’t just bury their bodies, but also tried burying the event by laying the blame for the massacre on the Nazis. This dark and horrific event that forms an indelible part of Polish history is the subject of this powerful and harrowing war drama from Wajda. The movie begins with the tragic state of the Polish people where one half is fleeing from the Nazis while the other is fleeing from the Soviets, and they meet at halfway point at a state of utter confusion and helplessness. Thus, with the ominous foreboding of World War II as its backdrop, the Katyn massacre is slowly revealed through a few Polish characters directly affected by its occurrence and aftermath, culminating in one of the most terrifying and tragic climaxes that is sure to many viewers shuddering. The movie boasts of spectacular and atmospheric photography, and a moody soundtrack.

This opened MIFF last year. A fine film. Brought about much discussion; including representation of history in films.

A powerful film well-described by you. The way Wajda structures it makes it accessible and gives it a suspenseful quality for non-Polish audiences or those unfamiliar with the history. The ending really conveys the horror of totalitarian power. It should be more widely seen.

I didn't know that, but it sure deserves to. Yeah, this film has indeed opened a can of worms on a popular scale about an event that was an open secret among the Polish.

Thanks Samuel for the good words. I concur, the Katyn massacre, though a massive event both from political as well as socio-cultural standpoints, isn't really as well known as some other World War II events. So that surely makes this film, a very good work of art apart, a very important piece of literature too. So a wider dissemination is indeed called for.