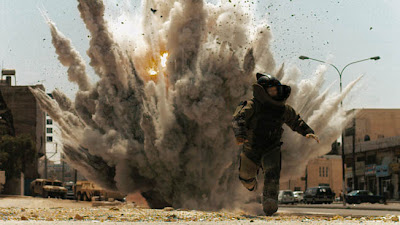 The Hurt Locker starts with the iconic quote “War is drug”, and then goes about both backing and demystifying the statement. One of the best movies on that historical blunder of genocidal proportions by George W. Bush called the Iraq War, The Hurt Locker is a taut and riveting work that places the viewers right in the middle of the killing fields of . At the heart of the movie lies an elite Explosive Ordnance Disposal squad tasked with the immensely perilous duty of diffusing live bombs ready to explode any given moment. And amidst the humid, dusty, fast crumbling and hostile Iraqi terrain we meet the cocky, arrogant, at times recklessly daring, but ultimately exceedingly competent Staff Sgt. William James, played with remarkable precision by Jeremy Renner. The movie, shot in cinema vérité style with documentary-like footages, and devoid of any preachiness or rose-tinted vision of the place, boasts of numerous moments of nail-biting tension that are bound to keep the viewers on the edge of their seats. Okay, the movie does have its moments of improbable scenarios, but Kathryn Bigelow has succeeded in keep a reasonably tight leash on the proceedings.

Yes indeed Shaubhajit, this is a tightly-controlled riveting work, that took the critical world by storm this year, before finally winning Oscars for Ms. Bigelow and the film. No doubt it's tremendous success will have some looking for flaws, but this one does hold up on repeated viewings and the blu-ray is absolutely stunning as you can well imagine. Renner gives a superlative performance too, as you note in this excellent capsule assessment.

Thanks a lot Sam for sharing your thoughts on this highly impressive war movie. I agree, when you have a movie this honest & riveting, its a good idea not to go around searching for flaws. Its not a masterpiece, but that doesn't mean its not a competent piece of filmmaking.

And yes, I can imagine how stunning it must be watching it on blu-ray!!!

"a taut and riveting work" - Just that. Nothing more, nothing less.

Yup JAFB, I know what you mean, cos I too felt the same at times :)

A thrilling and entertaining film. The only beef I had were the highly unrealistic premises and behavior displayed by the soldiers in general and SFC James in particular.

Excellent performance by Renner and superbly directed by Bigalow without taking sides on the war. The film is filled with hand squeezing tension. That said, I would not want to be around a character like James in a war, too much of a loose cannon, of feeling invincible, potentially putting others at risk. Most soldiers want to do their time and get home alive. I don’t believe he would be allowed to continue to operate that way. Still, as a movie the film grips you like a vise.

Yes indeed, I do agree with you on that. A flawless film this is not, but a gripping work this certainly is.

Yeah, Renner is really good in the movie. I was surprised he wasn't nominated for the Oscars (or was he?). But again, as you observed, his isn't the most believable character. Too 'dramatic' at times even, in terms of his acts. Neither has his character arc hasn't been developed that well. But they never really come in way of diminishing the film's ability to, as you say, grip you like a vice.

gawd I hated this cliché filled homage to testosterone. How can something be so predictable and unbelievable at the same time? Absolute trash, I say.

We've browsed through your reviews and thought that they are really original and interesting! We would like to invite you to publish your reviews on 7tavern.com, which provides an alternative platform for promising movie reviewers to showcase their talents. In addition, you'll find a growing community of bloggers who share the same passion for excellent movies! Based on the merit of your reviews, we intend to offer you exclusive publishing privileges on our website!

Thanks a lot for the appreciation and the gracious offer. I will get back to you shortly over email.

You're too harsh, Sitenoise. It wasn't that bad. The term "trash" should be reserved for features like 'Gigli' or 'Catwoman'.

Still, we're confused with your assessment here Shubhajit. You mentioned in our blog that you thought 'The Hurt Locker' wasn't anything amazing. But now it had received as much as 4 Stars from you. What gives? You've had a change of heart? We can sleep well though knowing that you didn't like it so much that you gave it 5 Stars. A best picture winner must receive no less than 5 Stars from you for sure and giving it 4 Stars is an indication that you too are on board with us. You think it doesn't deserve best picture, don't you? ;-)

Well, now you're trying to put words in my mouth :)

Well, yes, I didn't think it was amazing. It has its flaws. But its good nonetheless. As you said I might have overrated it by half a star. But in its favour, it did manage to keep me gripped for its entire length, never slackened in that sense. I also quite appreciated its documentary look though I know it has become a bit fashionable to make war films look like CNN footage, but it did manage to capture the madness & mayhem that is Iraq.

As for getting the best picture nod, it was a better choice than Avatar. And since these two movies were the only contenders, I'm happy in that sense. However, having said that, to be honest I haven't watched all the movies that got nominated, so can't comment from an absolute sense. But giving the trophy to Inglourious Basterds could have been a bit more fun :)

I don't know, this is pretty close to a 'boys and their toys' flick, which should be a trash genre.

But then, if you use that classification at such generic level, nearly all action flicks & numerous thrillers would have to be thrown into the dustbin.

I don't have a problem with that, which is not to say I don't enjoy a good trashy flick from time to time. But gun fights, and fisticuffs ... always stupid.

Ok, point taken. So I guess the crux of this elaborate discussion that we had is, you hated the movie, while I liked it :)

Apart from the brilliant screenplay and cinematography, I was bowled over by the nihilistic action sequences and use of background score, and shots with intense, nail-biting silence.

Yeah, the movie has completely de-glorified war, making it look not just something stupid and bizarre, but also where even the 'heroes' drop dead without so much as a preamble. I guess, as you observed, that automatically qualifies as nihilistic. Thanks for the fine encapsulation.