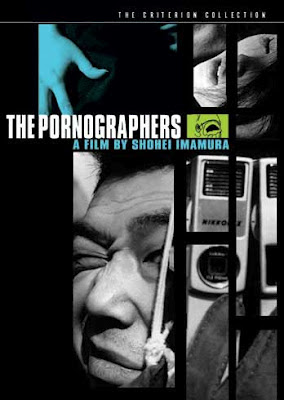 One of the greatest pleasures for a cinephile is to serendipitously ending up viewing a movie by a hitherto untried filmmaker without any expectations whatsoever, and instantly becoming an ardent admirer of his. The concerned movie is Shohei Imamura’s curiously titled feature The Pornographers, a tar-black and outrageously funny satire on the seedy underbelly of the fast burgeoning Post-War Japanese society, and a brilliantly cheeky take on our hypocritical and stilted attitude towards matters related to sex. Subu Ogata (Shoichi Ozawa)’s deviant life is anything but what one might consider as “normal” – he is in a live-in relationship with his widowed (and much older) landlady Haru who thinks her husband has reincarnated in the form of a carp; he lusts after Haru’s Lolita-esque teenage daughter; he is in the shady and scandalous business of making adult films, and needs to continually dodge the police and gangsters in order to survive; and, he is fast losing his potency (both figuratively and literally), and thus embarks on a grand project as his final contribution to the society that so despises him. Mesmerizingly photographed and hauntingly scored, nothing was sacrosanct for Imamura as he went about audaciously tackling such taboo topics as, among others, pornography, pedophilia, incest, and Oedipal subtexts, and the result was a gleefully twisted journey for the hapless and marginalized protagonist, outstanding and unforgettably played by Ozawa. Yet, for all its delirious humour and trenchant commentaries, the film also had palpable and affecting layers of pathos and melancholia – and the two reached a dizzying union in the fabulous finale of this complex, absurdist, subversive, irreverent and fascinating work.

"Yet, for all its delirious humour and trenchant commentaries, the film also has palpable and affecting layers of pathos and melancholia – and the two reach a dizzying union in the fabulous finale of this complex, absurdist, subversive, irreverent and fascinating work."

Well, Sir, your brilliant conclusion has left very little for readers to add to. Ha! This is certainly another look at the unique filmmaker Shohei Inamura,and the work was rightly picked up for the Criterion collection. It does target sexuality and post-war Japanese society and it's definitely a melting pot of taboo focus that's for sure. Impressively shot by Hinsaku Hemeda.

Thanks a lot Sam for your gracious appreciation. Yeah, the film was incredible from various fronts - be it its philosophical commentaries on human behaviour, or its socio-political contexts. And it worked superbly also for the sheer virtuoso filmmaking. I'm really glad that this particular movie acted as my introduction to Imamura.