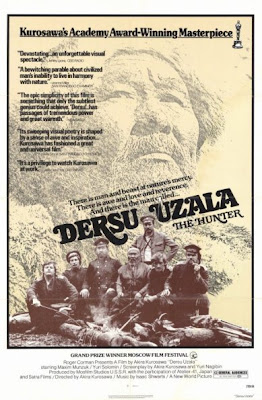 Akira Kurosawa’s life and career had taken a tragic turn after his disastrous foray into Hollywood and the commercial failure of Dodesukaden that led to the dissolution of the ‘Club of Four Knights’ production company, which eventually led him towards a failed attempt at suicide. Dersu Uzala, a Japanese-Soviet co-production, finally stopped his downward spiral and took him back to his former glory (his next two films would be the epic masterpieces Kagemusha and Ran). Based on the memoirs of a Russian explorer about his expeditions in the Siberian wilderness, this was, on one hand, a backhanded morality play about the beauty of untamed nature versus the trampling progress of civilization, and on the other, a touching chronicle of friendship between two men who couldn’t be more different from one another. The above-mentioned men were, the story’s narrator Captain Vladimir Arseniev (Yuri Solomin), who had undertaken the incredibly challenging task of mapping the topography of the Ussuri region at the turn of the 20th century, and the titular Dersu Uzala (Maxim Munzuk), a nomadic mountain-dwelling hunter belonging to the Goldi tribe who agreed to become the guide to Arseniev’s expeditions. Their journeys through some of the most dangerous and treacherous regions imaginable lead to the formation of a profound bond between two men representing, literally, two opposite spectrums of life – one representing knowledge and boxed civility, and the other, wisdom and freedom. Shot on location and in 70mm, the harsh and majestic beauty of nature, covered in one breathtaking vista after another, made this deeply philosophical (if a tad didactic) film a very satisfying watch.

I loved this film.

I haven't seen this film, but I've come across several reviews. I think I will check this out after reading this review.

Great to hear that.

Thanks. This most certainly is worth a watch.