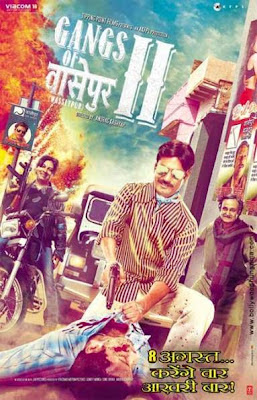 The opulent and sprawling gangland saga that Anurag Kashyap begun with the first part of Gangs of Wasseypur, reached its conclusion – and I daresay, a reasonably satisfying one – with the sequel. It begins right where the earlier part ended, with Sardar (Manoj Bajpayee) going down in a hail of bullets. When Sardar’s headstrong eldest son too is massacred, the perennially doped out Faisal (Nawazuddin Siddiqui) becomes the unlikely successor to their clan. Contrary to his seemingly passive nature, he possesses panache for sudden and excruciating violence, and that instills enough fear into everyone to accept him as their leader. Meanwhile, Sardar’s son from his mistress, the slippery Definite (Zeishan Quadri), becomes Faisal’s principal henchman. Before long a bloody turf war starts between Faisal and the all-powerful mobster turned politician Ramadhir Singh (Timangshu Dhulia), who was behind the murders of Faisal’s father and grandfather; it destroys everyone in its path, and leads the film to its explosive, blood-soaked and nicely orchestrated climax. Like its predecessor, this too comprises of a darkly humorous script, and solid performances by the ensemble cast led from the front by the brilliant Siddiqui, and a notable supporting turn by Huma Qureshi as Faisal’s voluptuous wife. And though it too drags in the middle on account of being overlong, Kashyap managed to keep his over-indulgences under a stricter leash this time around. Consequently, I found the sequel comparatively tighter, more gripping, and with lesser distractions. As rightly observed by another critic, the best version of this epic saga would be to cut the excess flab and present the two parts as a single film – the way it was originally meant to be.

Gangs of Wasseypur, might be another action-packed movie for others, who does not know the history of Dhanbad, and the fights. Some of the plots and locations had been changed and some left out. A partial true story and the end in reality is not the way it has been shown. Though the movie meanders through plots and sub-plots, all parts worth equal.

Do you, by any chance, mean to say that the film is based on a true story? If yes, that sure is news to me, and I'd be interested to know more about that.