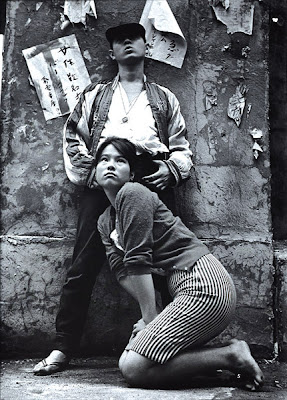 Though his fifth film as a director, Pigs and Battleships was the first movie that made the world stand up and take notice of the Japanese iconoclast Shohei Imamura. His obsessive fascination with the seedy underbelly of post-WWII Japanese society took a gleefully grotesque and comically violent form in this darkly funny movie laced with trenchant socio-political commentaries. The film’s protagonist Kinta (Hiroyuki Nagato) is glibly amoral anti-hero with a swagger to remember, working, in the hope for a fat bonus, for the Japanese yakuza gangsters and racketeers who have started a pig farm as part of a scheme. His girlfriend Haruko (Jitsuko Yohimura) desperately pleads him to go straight so that she need not prostitute to American G.I.’s to sustain herself. The partnership of convenience between the powers that be, however, soon goes for a toss, and it’s our young, dim-witted Romeo who finds himself in the middle of the brewing tussle, leading the film to a carnivalesque and unforgettable over-the-top climax comprising of an avalanche of pigs in the thriving naval-base town of Yokosuka, where the story is set around a decade after the war. No one is spared Imamura’s vitriolic observations and acerbic jabs, be it the arrogant G.I.’s, the opportunistic Japanese mobs looking to make some quick cash, or the corrupt Japanese-American and Chinese middlemen. Shot in glorious B/W, the film comprises of bravura camera work and smart usage of music in order to portray the chaotic proceedings and their ironic underpinnings. Nagato gave a fabulous portrayal, as did the entire support cast, thus providing us with an idiosyncratic, immensely enjoyable and subtly humane movie.

You push all theride buttons once again Shubhajit, with this marvelous capsule review of an essential work by a revered Japanese master. My favorite of his films is THE INSECT WOMAN, but this gem pushes close. Agreed that the use of music is striking and Nagato's performance is indeed superlative. The Criterion print is typically outstanding!

Thanks Sam. From what I've watched of his films so far, my favourite Imamura continues to remain The Pornographers. But yes, both The Insect Woman & this film are strong contenders for that slot. In my opinion, this movie remains important also because Imamura really found his voice & style that would define his subsequent works. Of course, the fact that he never before had the kind of independence as he enjoyed here could be the reason for that.