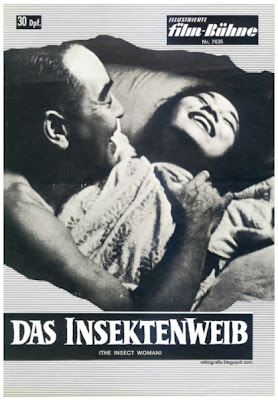 The second film in Japanese iconoclast Shohei Imamura’s provocatively titled trilogy Pigs, Pimps & Prostitutes (coined by Criterion), The Insect Woman would rank among the most daring films of his career – and that’s saying something, especially if one is aware of his body of work. The film was daring for its complex content, but more so for its audacious scope. Structured in the form of a bildungsroman, it covers half a century in the life of its complex protagonist Tome (superbly enacted by Sachiko Hidari), with the various socio-political upheavals of contemporary Japanese history forming a crucial backdrop to her fascinating, if tragic, life. The illegitimate daughter of a dim-witted village farmer, she experiences the various extremes that life, her various acquaintance and the times can throw at her – from being exploited as a prostitute to becoming the madam of a brothel and exploiting others with the tables now turned, from swindling to being swindled, and from utter impoverishment to power and money to back to square one. She has an extended relationship with a seemingly decent natured man only to find after her jail term that he hasn’t just swindled her during her absence but has even started exploiting her young daughter, while her relationship with her father is grotesque and perverted yet also strangely touching. Imamura touched upon a variety of dark themes, like sexual exploitation, incestuous relationships, prostituting (both literally and figuratively) to the Americans, etc., to portray the sordid underbelly of Japan’s changing fortunes and choices over the years. The script alternated between ribald humour, pointed social commentary, and poignant human drama, leading this audacious episodic film to a memorable climax.

INdeed Shubhajit! Beautifully pennded and concise framing of the Imamura film I like best of all. It's very dark of course but it packs an emotional wallop!

Thanks a lot Sam for the appreciation. Yeah, it worked on multiple levels (in terms of style as well as content), and that's what made this such a richly complex and gratifying film. Great to know that this is your favourite Imamura.